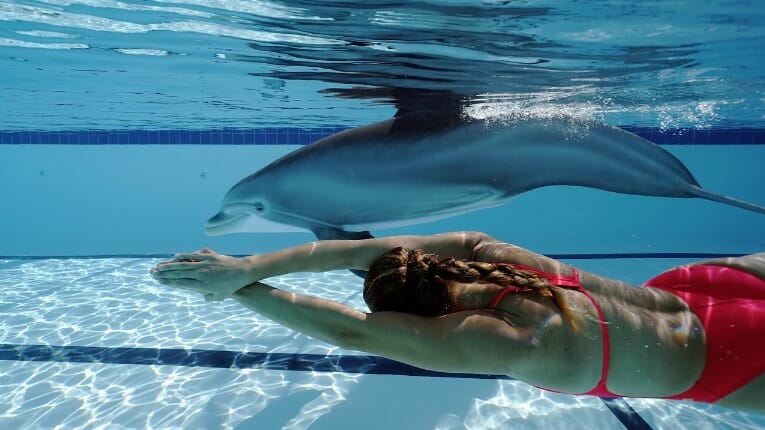 Nearly indistinguishable from their real-life counterparts, newly-developed robotic bottlenose dolphins could save hundreds of dolphins from the cruelty of captivity.

Working with America’s top animatronics experts, New Zealand-based Edge Innovations hopes to help people swim with “dolphins” without stealing these majestic creatures from the wild or breeding them in captivity.

“The marine park industry has had falling revenues for over a decade due to ethical concerns and the cost of live animals, yet the public hunger to learn about and experience these animals is still as strong as ever,” California-based designer Roger Holzberg told The Guardian. “We believe that it’s time to reimagine this industry and that this approach can be more humane, and more profitable at the same time.”

The remote-controlled, 600-pound prototype bears an uncanny resemblance to a live dolphin and convincingly interacts with humans. Test audiences couldn’t tell the difference between the robot and the real animal, according to developer and reality gaming expert Melanie Langlotz, who came up with the idea of using animatronics in aquariums after a Chinese company asked her to design an aquarium containing live animals. Uncomfortable with animal captivity, Langlotz and her business partner, Li Wang, brainstormed for alternatives.

The robotic dolphins last longer than live dolphins and cost far less to upkeep, making it an appealing prospect to aquariums currently losing revenue. Red Star Macalline Group sponsored the first development phase and is considering implementing the robotic dolphins into its aquariums in China. Other Chinese companies have expressed an interest in the faux dolphins as a potential way to accommodate the country’s marine park industry amid the newly-imposed nationwide ban on the wildlife trade, RNZ reported.

As animal captivity falls increasingly out of favor, the development team is focusing on ways to mass-produce the robotic dolphins and is looking to replicate other creatures, such as sharks and whales, in hopes of coming one step closer to upending the zoo and aquarium industries.