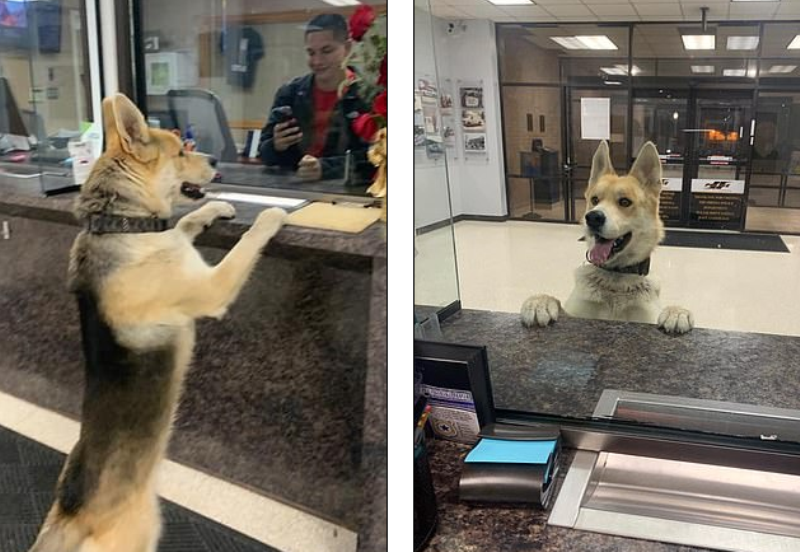 Reminding us just how intelligent our four-legged friends are, a canny canine showed up at a local police station in Texas to seemingly report himself missing after running away from home.

Staff at the Odessa Police Department were delighted when Chico, a German Shepherd mix, strolled into the station during the middle of the night.

“We were all excited to have him in the building,” Sergeant Rusty Martin told The Dodo. “We had a tennis ball and threw it in the lobby for a bit. Everyone loved on him.”

After Chico decided he’d received enough affection from the officers, the sneaky pup quickly left the building, disappearing before anyone could stop him.

“This happy guy randomly strolled into the front desk of the Police Department last night,” the caption read. “We’re thinking he wanted to apply for a K-9 position after eliminating a Lassie type situation. He was given lots of love and attention until he decided it was time for him to leave.”

As it turns out, the one-year-old dog returned home to his caregiver Edward Alvarado, who had been asleep and oblivious to Chico’s adventure. In fact, Alvarado only became aware of what happened after being alerted by his nephew to photos of the cheeky dog on social media.

“He asked me, ‘Is that Chico?’” Alvarado told NewsWest 9. “I came outside and checked, but he was there already. That’s kind of cool. He knows where to go!”

The police department is happy to have the German Shepherd visit again.

“We were relieved to learn he safely returned to his owner,” the department wrote. “Chico is welcome back anytime.”