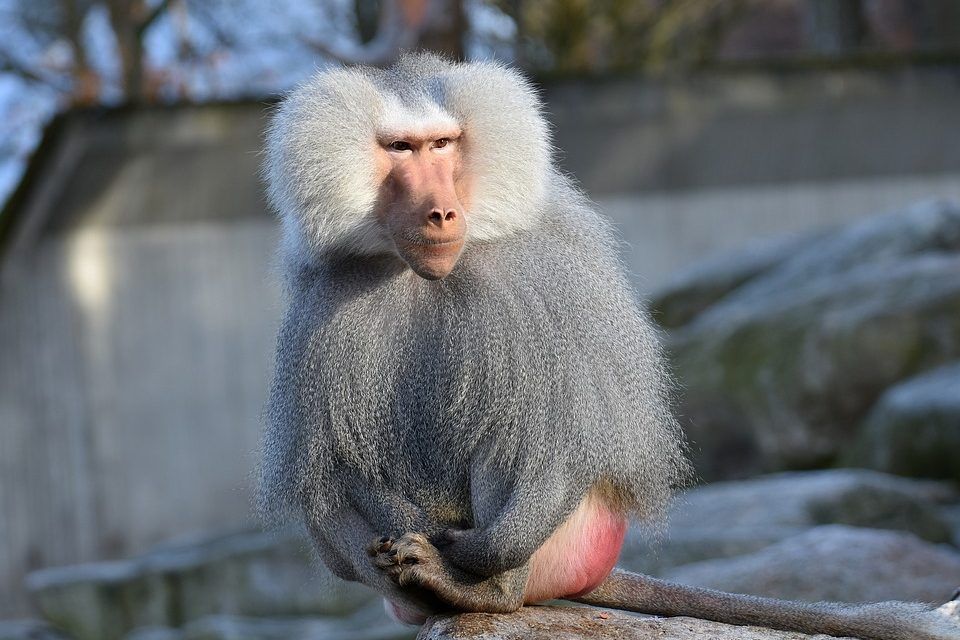 Four baboons, bred and held in captivity for research, experienced 30 minutes of freedom after they worked together to escape from the Texas Biomedical Research Institute this week.

It took officials less than half an hour to retrieve three of the animals, and although they thought one remained free, staff later determined that the fourth animal had returned to the enclosure shortly after the escape.

Following the incident, staff concluded that these intelligent primates had worked together to roll a 55-gallon barrel over to the fence of their enclosure, pushed it upright, and climbed out. Once out of the enclosure, the baboons were easily able to scale the perimeter fence and make their way to nearby roads, where locals were shocked to see them running along beside cars.

A statement released by the facility tried to downplay the escape as a “perimeter breach incident.”

“This was truly a unique incident,” said Assistant Vice President for Communications Lisa Cruz. “We have been caring for research baboons for more than 50 years. We have nearly 1100 baboons on the property that date back eight generations. Baboons, as with all our animals, are critical to biomedical research.”

Housing more than 2,500 animals, the Texas research facility subjects them to experiments to develop vaccines and medicines for human use. And this isn’t the first time such an incident has occurred here. In 2011, the lab were fined around $25,000 for repeated animal escapes, one resulting in injury to a caretaker and one resulting in the death of a primate.

Other issues in recent years have been reported by the USDA, including several primates dying from strangulation, bite wounds, and equipment failure.

Throughout the U.S., there are 100,000 nonhuman primates imprisoned in 159 research centers and 15 federal facilities. Over a quarter of those primates (25,483) are used in experiments that may cause pain or stress, and 740 of those monkeys are not provided with any kind of pain medication.

Researchers say that testing on primates is essential, due to the similarity in DNA to humans. However, animal tests are cruel and notoriously unreliable.

In the last three years, research centers have received 377 citations for not obeying the law, and 77 violations directly affecting the health of the animals used, reports the NBC Bay Area Investigative Unit.

Dr Kevin Healy of the University of California is heading a team working on a new method that uses real human heart cells combined with computer technology. In the future, this methodology will enable scientists to effectively test the effects of drugs on the human heart, with the potential to expand to other organs, such as the liver.

Harvard University and the University of Oklahoma have already shut down their primate research programs, and research on great apes is being phased out throughout the country. Still, thousands of primates suffer every day in labs.

Hundreds of millions of taxpayer dollars every year help fund the torture and abuse of these sentient, innocent animals. Animal advocates cite endless cases of neglect, torture and abuse, and ask why this is still allowed to happen when the experiments on animals don’t often translate to effective treatments for humans.