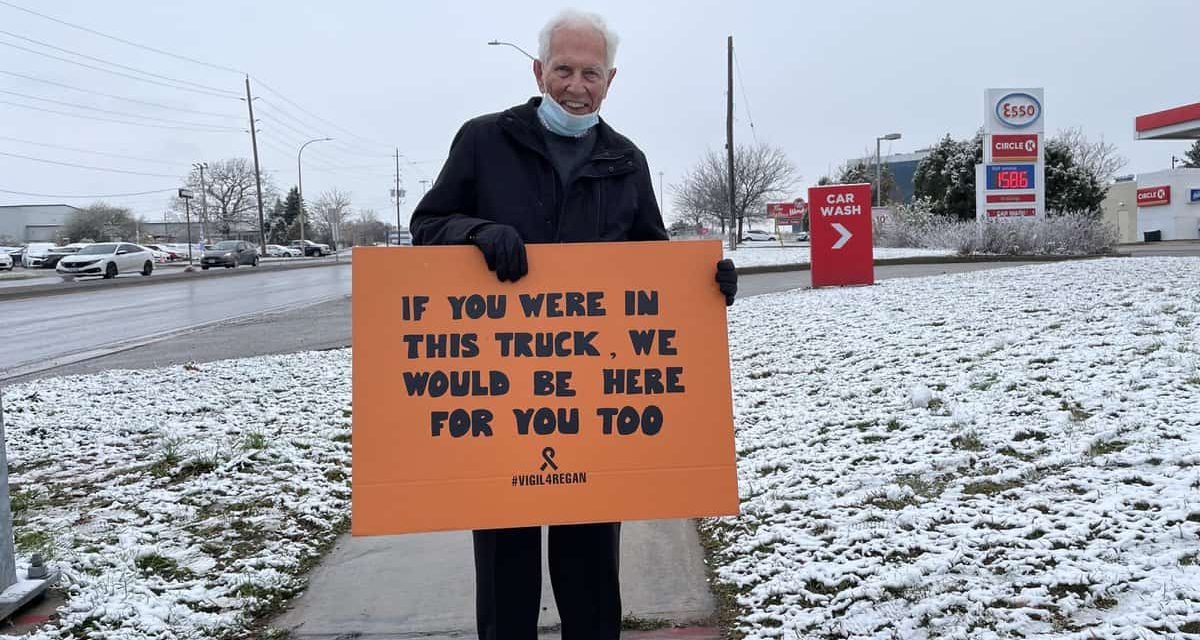 Bill Russell via Animal Save Movement

Bill Russell and his wife Pat sent a letter to Doug Ford, the head of Ontario’s government, with a plea to repeal Bill 156, also known as the Security From Trespass and Protecting Food Safety Act.

The bill restricts people’s ability to expose animal cruelty on factory farms by criminalizing whistleblowing. It passed the day before an on-site protest that Regan Russell attended on June 19, 2020, during which she was struck and killed by a truck driver, who has since been charged with careless driving and is scheduled for trial in 2023.

In the letter, the Russells noted that dozens of legal experts had warned that the bill violates people’s rights to free expression and peaceful assembly and is unconstitutional.

“I plead with you on my 92nd birthday on December 6, 2022, to repeal the Security from Trespass and Protecting Food Safety Act in memory of vegan activist Regan Russell,” Bill Russell wrote. “She dedicated her life to ending animal oppression, and her life was so unjustly taken in the process.”

Bill Russell became vegetarian in 1980, after Regan gifted him a copy of Peter Singer’s Animal Liberation. He attended protests against fur in Ontario, and protests against Marineland in Niagara Falls, with Regan before her untimely death. 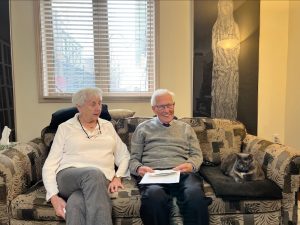 Pat and Bill Russell (Courtesy of Animal Save Movement)

He continues to attend vigils hosted by animal welfare group Toronto Pig Save outside the Fearmans slaughterhouse where Regan was killed and to speak with other activists about her lifelong work to create a better world for animals.

In November, Bill Russell gathered with a small group around Regan’s grave to remember and celebrate her life.

“I have to say thanks if there is a god for giving us Regan,” he said in a video, shared by animal welfare nonprofit Animal Save Movement. “Thank you for our dear beloved Regan, who lies here as we think of her life and how she gave that life in protesting animal oppression.”

The epitaph on Regan’s grave reads: “I’m trying. I don’t know if it does any good. But I know doing nothing does no good.”

Animal Save Movement said Regan Russell’s work continues to inspire activists and rescuers around the world.

In June 2021, Italian rescuers saved a sheep at one of Europe’s largest sheep slaughterhouses and named the animal Regan. In Turkey, a farm worker who spoke to activists later helped rescue a sick chicken awaiting slaughter, who also was named Regan, according to Animal Save Movement.

Those interested in learning more about Regan’s life and work can view the following documentaries, or visit this Facebook page to Go Vegan for Regan and help honor Regan’s dedication to stopping suffering by choosing vegan meats, cheeses, and milks which don’t harm animals.

There Was A Killing – Shaun Monson