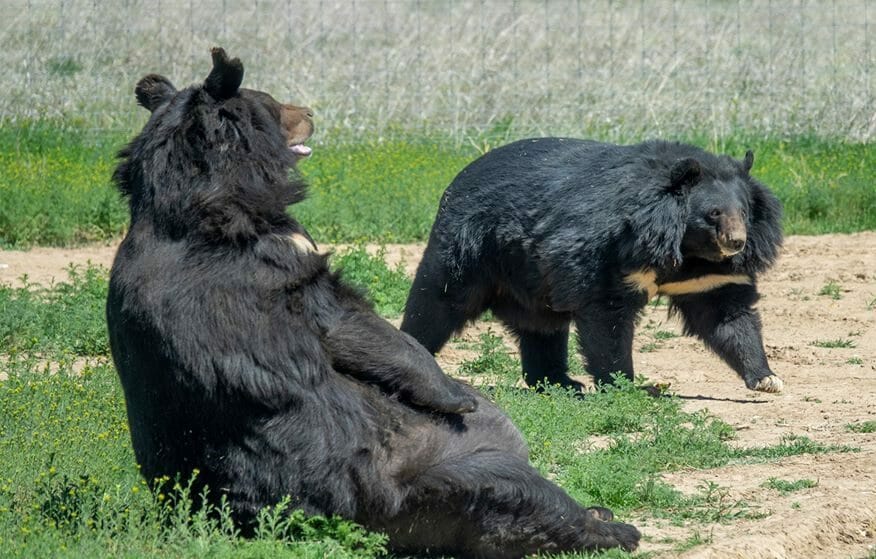 Dillan, an overweight Asiatic black bear who was rescued from a cramped enclosure at a sportsmen’s club in Millmont, Pa. earlier this year, is now thriving in an open, grassy area at the Wild Animal Sanctuary in Keenesburg, Colo, living with his enclosure mate, Lily, a female Asiatic black bear.

After arriving at the sanctuary in January with a host of untreated medical problems, Dillan underwent extensive dental surgery to remove some of his decaying teeth. Caretakers gradually acclimated the obese bear, who weighed 875 pounds at the time, to a spacious enclosure, where he became accustomed to living near other bears.

“Like most bears in the wild, they live in the same space but apart,” the rescue reported in Sanctuary News, its quarterly publication. “They are often seen in the habitat … doing what bears do, which includes climbing and sitting on legs, digging and swimming, and, of course, eating.”

Dillan’s health improved and he quickly lost weight. Previously, his belly dragged on the ground as he walked, but that soon changed.

Before relocating to the sanctuary, Dillan languished for decades in the cramped confines of a cage near a shooting range, enduring the alarming and near-constant gunfire just 200 yards away. Caretakers at the Wild Animal Sanctuary estimated that he was several hundred pounds overweight when he arrived, and Dillan suffered from various other ailments, including arthritis and infected gums.

He also suffered from psychological damage after decades in captivity, as evidenced by his visibly distressed appearance and tendency to rock back-and-forth. After numerous USDA citations and amid mounting pressure from tens of thousands of animal activists, the sportsmen’s club released Dillan into the care of rescuers, who provided the unhealthy bear with a long-overdue second chance at life.