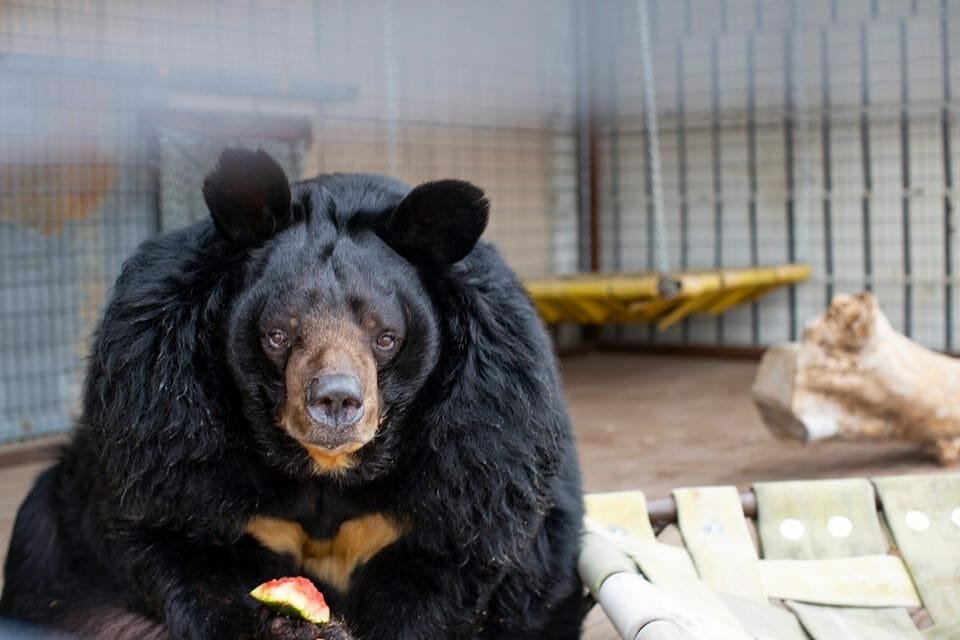 Dillan, an Asiatic black bear, recently started a new life full of freedom, safety, and comfort with the Wild Animal Sanctuary after likely spending decades in a cramped, bare enclosure at the Union County Sportsmen’s Club in Pennsylvania.

The ailing bear lingered in captivity for many years in Millmont, Pa., where he endured the stress of loud, continuous gunfire from a shooting range just 200 feet away. Dillan also suffered from a host of untreated medical problems, including morbid obesity.

Dillan’s obesity stemmed from a lack of exercise, which his small, cement cage did not allow for, and people regularly feeding him fattening leftovers from the club’s restaurant, according to PETA. He also lacked access to an adequate water supply.

Additionally, Dillan is declawed and has numerous other health concerns, including arthritis and infected gums. In October 2019, the USDA determined that he had not been treated for his dental issues, which were discovered two years prior. As a result, he suffered from prolonged, significant pain.

His physical condition is not his only concern; Dillan also experienced psychological damage. He looked visibly distressed in the crowded confines of his enclosure, as evidenced by his frequent rocking back and forth, which USDA investigators observed firsthand.

Over the years, the USDA repeatedly cited the establishment for mistreating its animals. The citations were issued for feces-covered enclosures, inadequate space for animals, a lack of trained handlers, contaminated drinking water, stressful conditions, and poor animal diets.

The sportsmen’s club released Dillan after facing mounting pressure from tens of thousands of activists, including actor Alec Baldwin, and various animal welfare organizations. He is receiving long-overdue veterinary care at the Wild Animal Sanctuary in Keenesburg, Colorado and will resettle at a spacious refuge during the spring, where he will spend the remainder of his life in the company of another Asiatic bear.