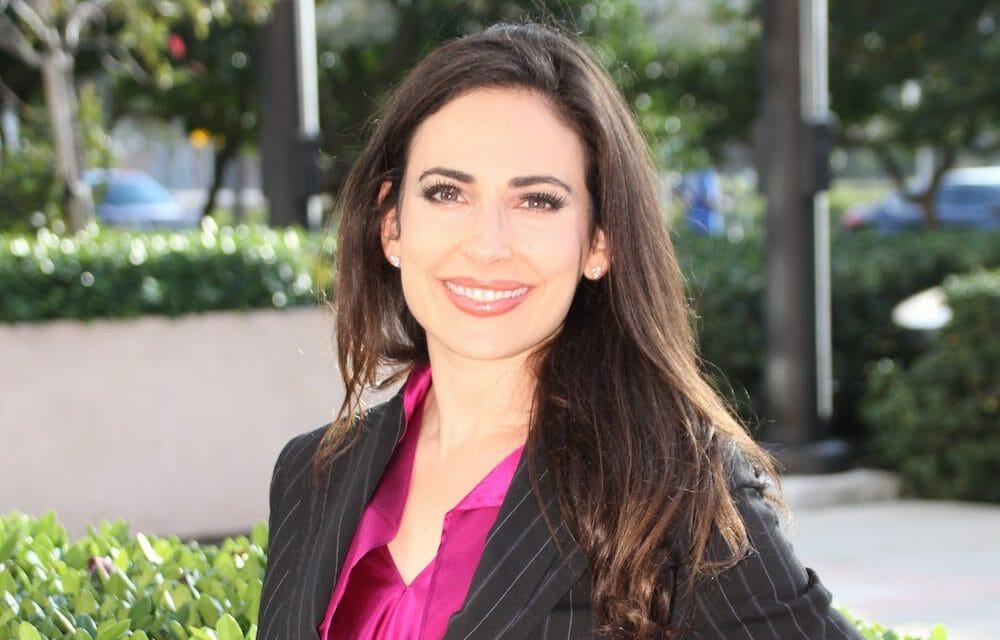 I interviewed Carissa about her experience as a lawyer, what it means to have been a vegan since birth, and her work toward creating a more compassionate world through law.

Nina: Can you explain to readers what BeVeg is, and how to use it?

Carissa: The BeVeg vegan symbol is a stamp of approval for companies or products that wish to make their vegan claims official. BeVeg is a global vegan certification firm, with standards issued and managed by the Law Offices of Carissa Kranz.

Veganism in general, even the word “vegan,” is not defined or regulated by any global laws. Right now, anyone can claim vegan status, but the question is, by what standard, and who is holding these vegan claims accountable? BeVeg exists to raise the standards for consumer transparency. We require companies that apply to disclose all ingredients, suppliers, processes and trade secrets.

Attorneys by nature are regulators. As a law firm, our attorneys are defining and advocating for a legal vegan standard regarding labeling laws. The reality is, consumers want truth and transparency in labeling whether they are vegan or not. The BeVeg vegan certification mark boosts consumer confidence.

N: What inspired you to create BeVeg?

C: I’m a vegan from birth, and I have spent my entire life scrutinizing labels and ingredients to ensure my food is vegan. I was that girl at Subway who held up an entire line of rolling eyes because I needed them to change their gloves before they made my sandwich to ensure no cross-contamination. I was that young girl who decided to write Skittles a letter to remove gelatin (which they did, though I do not know if this is because of my letter) because I did not want to eat trace animal byproducts or animal bones on a playdate.

I wanted a verified vegan symbol I could trust. As veganism became more popular and vegan labeling started appearing on product packaging, I was thrilled and relieved. Finally! My quest for vegan products without any animal exploitation will be easier. Wrong! My research yielded facts that any vegan or non-vegan would take issue with. As a seasoned lawyer, and lifelong vegan, this is a topic I am inspired to handle and equipped to solve.

As an ethical vegan, creating a BeVeg vegan certified symbol was easy. BeVeg and the vegan cause is an expression of my inner truth. When you speak your truth, you do not have to sell, you just need to be. BeVeg is not about me, but the BeVeg vegan symbol is an extension of me as a legal concept that came to me and through me by just being vegan.

For example, the law protects trade secrets to the detriment of consumer transparency. That means “incidental ingredients” from the manufacturing process that may leave trace animal products in the final product do not have to be disclosed. It also means “insignificant ingredients” that are less than 0.5 grams per serving, can be rounded down to zero and not disclosed. Ingredients of less than 1 percent may be listed in any order, and “natural” colorings and flavourings do not need to be itemized, which is often misleading when it comes to knowing what is really in your product.

Meanwhile, the Tobacco and Trade Bureau (TTB), which regulates alcohol, is worse for vegans. The TTB has zero ingredient and process disclosure requirements. There are up to 62 ingredient additives that can be in your wine, and none of it has to be disclosed. This was very upsetting news to me, as I thought all wine, beer, and spirits were vegan. Alcohol can have non-vegan additives like yeast with a dairy derivative, or sugar with bone char, or even be made with egg whites, fish bladder (isinglass), and animal bones (gelatin) — just to name a few. The BeVeg vegan certification firm created a free app, which has been called the “ultimate alcohol guide.” You can download the app on the Apple app store or the Google Play store.

N: You’re an attorney — how have you used these skills to promote plant-based eating?

C: I’m the attorney founder and CEO of BeVeg International, which is a global law firm for vegan certification and advocacy. By making vegan certification literally a practice area, we are counseling companies on how to become vegan. We are eliminating supplier source ingredients from the supply chain so products can be officially vegan and qualified to use the prestigious BeVeg vegan symbol. We are pioneering a path forward in our existing laws to make room for vegan laws.

As an awarded “Super Lawyer,” and vegan from birth, I was the chosen lawyer on set and on hand for the new Amazon Prime vegan cooking show, New Day New Chef.  Also, we did the trademarks pro bono for the vegan cooking show to protect its future success and intellectual property.

I continue to offer my legal expertise to New Day New Chef in whatever capacity I can. BeVeg global vegan certification is discussed in Season 1 Episode 3, as we whip up delicious vegan deviled eggs and pizza.

I believe anyone who watches the show will see being vegan is not a sacrifice. It is an awakening. Co-hosting, producing, and promoting this show with Jane Velez-Mitchell of the JaneUnchained News Network for the Animals was a blast!

N: You were born and raised vegan, which is really rare. Can you talk about why your parents made this choice, and why you remained vegan as an adult?

C: I am a fourth generation vegetarian on my mom’s side. My great grandfather from Atlanta, Ga. became vegetarian to resolve health issues. The change in diet was successful for him, and so the trend continued for generations in the family.

It was my mom who took it one step further. She became vegan when she realized dairy was bad for you. Against all doctors orders, my mom had a vegan pregnancy with me and raised me vegan. My parents divorced when I was about five years old, and that’s when I was at a crossroads. My mom was vegan, but my dad was not.

Veganism was a foreign concept to my friends, and I had no one like me. But I was lucky to be born into and given the choice. My mom was a health nut and a great vegan cook! At five, I made an ethical and moral decision to consciously be a vegan. I did not want to eat animals. I loved them!

N: What are your plans for the future?

C: To use my legal education, advocacy and passion to lobby for a more compassionate planet. Veganism needs to be a non-religious, moral, constitutional class with strict scrutiny protections to ensure our fundamental rights and basic civil liberties are not infringed upon. Ethical vegans need to know their rights to ensure the protection of these fundamental rights under the law. Laws need to define “vegan” and be defined around vegans in general.

Some legal issues to consider include: vegan label law, including food safety laws and truth in labeling laws; the right to consume without harming or exploiting animals; vegan rights in places of public accommodation; vegan travel law; vegan family law; the rights of a vegan patient; vegan labor law to prevent discrimination in the workplace; the vegan right to emotional distress and punitive damages for being served meat; whether meat and dairy is the next tobacco class action litigation considering the addictive qualities of the meat and dairy industry, the harmful health consequences, and the willful misrepresentation of the health benefits; if clean air is a fundamental right, vegans might have legal rights to sue any industry players for encroaching on these rights, whether it be raised carbon dioxide pollution or airborne global viral pandemics born from meat markets and slaughterhouses.

During the coronavirus global crisis, I can say with certainty that my immediate plan is to further the BeVeg campaign to “make veganism go viral.” A vaccine may end this pandemic, but veganism will solve the problem. We invite vegan products and companies who support the closure of live meat markets and slaughterhouses to certify vegan. If you care about food safety and the survival of our species, which is dependent on the survival of all species, show off your socially-conscious business practices by proving up your vegan claims and using the global vegan symbol.

Together, we can make “veganism go viral.” Globally certify vegan with BeVeg and join the movement to shut down live meat markets and slaughterhouses. Certification fees will go to fund litigation for vegan rights.

C: I have a book entitled Vegan Law: Know Your Rights. Vegan Publishers is the publishing house, and it will be released in 2020. It is a thought-leading text about many of the rights I mentioned above.

I am also a selected author for another vegan book to be published by Lexington. My assigned chapter to author is “Global Vegan Label Law: The Need for Certification.”

Finally, human laws are an intended version of higher laws. I have a spiritual law book in the works entitled The Laws That Matter, which is not a vegan book per se, but any ethical vegan would understand it to be. It is all connected, and we are all connected. The book uses courtroom lingo and protocol as a tool to teach you how to live your most divinely-inspired existence. We all have the right to practice these universal laws. We do not need to go to law school or pass a bar exam. Our existence is our birthright.

While I’m licensed to practice law in Florida, New York, and Washington D.C., and I’ve built a global company, I’m most inspired practicing universal laws — The Laws That Matter. “You are in your power when passion and purpose becomes your profession.” This is the law of divine compensation and a direct quote from my book. By being a part of the lawmaking process for ethical vegans, I am answering to a higher calling, and I do not wish to be in contempt of my calling.