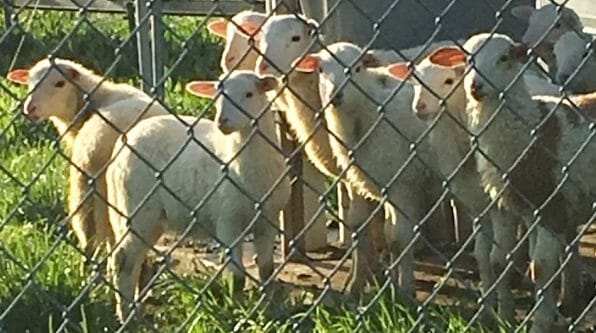 Nine innocent lambs are slated to die at Antioch College in Ohio as part of the college’s ill-conceived farming program — unless a donor forks over $1 million, which the school says they’ll use to purchase more animals for slaughter, anyway.

The private liberal arts college acquired the “living laboratory” of lambs last spring and intends to serve them to students as food.

The lambs attracted the attention of animal rights activist Dr. David Nibert, who is outraged that the college is treating sentient beings as disposable. Nibert is a professor at nearby Wittenburg College, and lives across the street from Antioch.

“I am both disappointed and appalled that Antioch College, once one of the most progressive and forward-thinking colleges in the country, is now objectifying animals, raising and killing them, and teaching the students the practice is noble and sustainable,” Nibert told Lady Freethinker.

From the beginning, Antioch rejected requests for meetings with animal rights advocates and offers from those willing to purchase the lambs’ freedom, according to Nibert.

“The college sidesteps the discussion on their plan to actually kill the lambs by statements about the purported sustainable nature of their program,” Nibert said. “They have not responded to critiques about the environmental harm related to raising animals in pasture. And the college has not addressed any of the ethical issues involved in their use of the lambs.”

Antioch recently banned Nibert and other activists, including his Committee to Save the Antioch Lambs group, from even stepping foot on campus.

A mother named Barbara Pearl, whose son Jason Seth Houten became a vegan at Antioch before perishing in a tragic accident, asked the school to release the lambs in her son’s honor. However, the college allegedly refused, naming a price of $1 million to spare their lives. But even if she paid that exorbitant price, they reportedly would only to use the money to buy more animals and butcher them for food.

We must speak out to save the lambs’ lives.

Please respectfully contact Antioch College President Tom Manley at 937-319-6164 or [email protected], requesting the release of the lambs. Please remain polite — previous threatening emails have only caused the school is to double down on their stance and denounce all of those fighting to save the lambs.

Nibert has also created a petition calling on Antioch to release the lambs to one of the several sanctuaries who are offering to provide them with safe forever homes, including Farm Sanctuary.