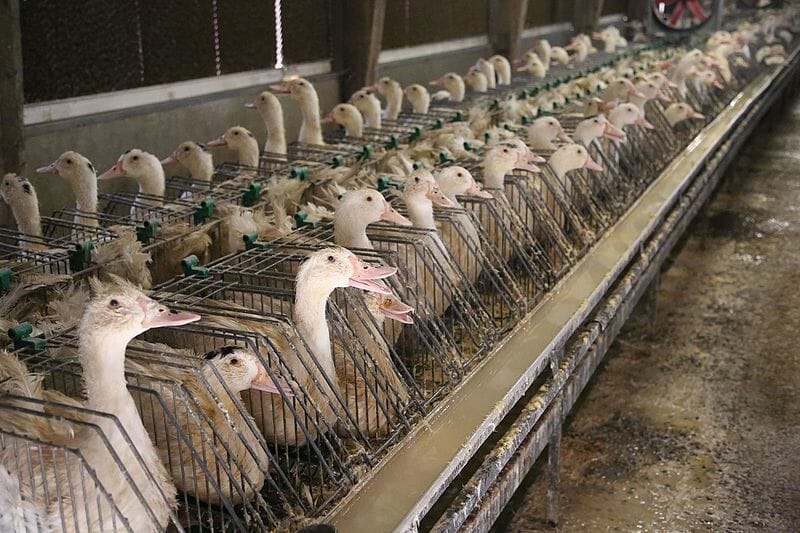 “Humane, natural, low stress and ‘hand-fed’” are just some of the terms the Union, NJ, company used in marketing its foie gras, made from the liver of a goose or duck that has been force-fed with a feeding tube. VFAR filed the lawsuit in Brooklyn federal court, asking for an injunction to stop D’Artagnan from using false and misleading advertising on their products.

“If their concerns are truly with animal welfare, they should focus their efforts on large factory farms, where there are real concerns,” said a representative of D’Artagnan in a statement. “We’re confident that the justice system will see this lawsuit for what it is.”

Meanwhile, VFAR maintains that the marketing copy obfuscates just what happens to these birds, thousands of whom are kept in massive barns without exposure to the outdoors or their natural environment. In typical foie gras settings, birds endure brutal treatment. Every eight hours, workers shove plastic tubes down the birds’ beaks and pump food down their necks. As a result, the livers grow up to 10 times the normal size – over as few as 20 days.

This process can have major health implications, such as causing birds to grow too big to walk or even breathe properly.

D’Artagnan owns two enormous bird farms just outside of New York City, where around 350,000 birds are raised every year. The company makes $15 million from the sale of the birds fattened livers.

Previous undercover investigations at a New York foie gras farm have revealed a slew of horrors, including ducks with open, bleeding wounds stuffed into tiny wire cages. Many birds die due to the force-feeding process.

Lady Freethinker is proud to have been part of the coalition that successfully banned the sale of foie gras in New York City. The production and/or sale of foie gras is banned in many countries and regions, including California, Israel, Germany, Norway, India, Australia and the United Kingdom.