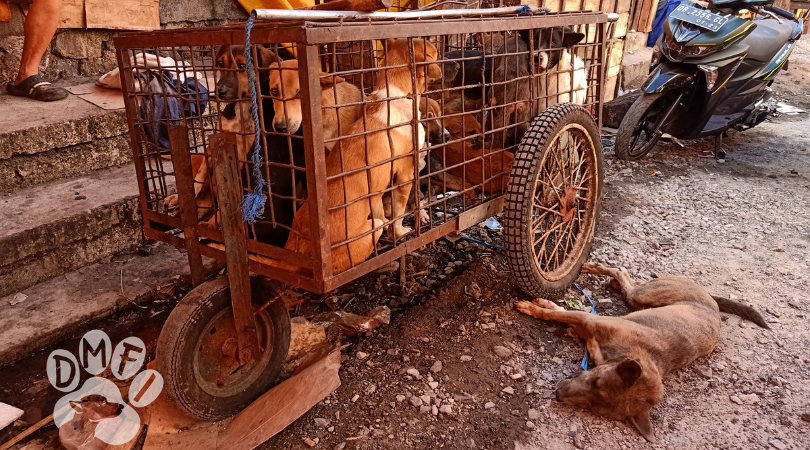 On August 22, Activists from the Dog Meat Free Indonesia (DMFI) coalition presented a petition with more than a quarter of a million signatures to the Governor of North Sulawesi, urging him to put an end to the inhumane, violent dog meat industry in the region.

In spite of a directive issued by the Indonesian government in September 2018 banning dog and cat meat, these markets still abound in North Sulawesi, as evidenced by recent video footage collected by DMFI campaigners.

“The Indonesian government has already vowed to end these illegal and dangerous trades, but now it is up to the regional authorities to take action and to prioritize the well-being of the nation and its population rather than the minority who partake in illegal activities,” said Karin Franken, co-founder of Jakarta Animal Aid Network.

Governor Olly Dondokambey does not appear to be taking any action to shut down these shocking “traditional” markets — known as extreme markets — where thousands of cats and dogs are slaughtered every month for their meat.

Video filmed only last week revealed the atrocities that occur at these markets every day; traders beating dogs to death with clubs and blowtorching the animals while they’re still alive — all while dozens of other caged dogs watch in terror, waiting for their turn.

Along with the heartbreaking footage from DMFI came the news that dogs and cats are still being slaughtered in the town of Tomohon in North Sulawesi, in spite of the Mayor pledging to stop the sale of live dogs and cats at these notorious markets earlier this year.

Not only is the rampant dog and cat meat trade in Indonesia gruesome and cruel, but it also poses a significant threat to human health. According to DMFI, around 8-11 % of dogs sold for human consumption in the local markets of Sulawesi are infected with rabies. Not surprisingly, North Sulawesi has one of the highest rates of human deaths from rabies in the country.

“Our investigations have shown North Sulawesi to be dragging its heels on the very real human and animal health and safety risks of the dog and cat meat trades,” said Dr. Katherine Polak, director of FOUR PAWS. “Inherent to the trades are extreme cruelty to animals and illegal activities, including pet theft, plus the very real threat of rabies transmission to tourists and communities. This results in immeasurable damage to the country’s international reputation.”

DMFI is comprised of Change for Animals Foundation, Humane Society International, Animals Asia, FOUR PAWS, Animal Friends Jogja, and Jarkata Animal Aid Network. The coalition continues to campaign for an end to the dangerous and cruel cat and dog meat industry in Indonesia, hoping to save thousands of animals every year from torture.

“Indonesia’s people, and the thousands of dogs suffering the most unimaginable cruelty, deserve much more than empty words,” says Animals Asia Founder Jill Robinson. “Those in power have to act now if we are to prevent innocent people dying of rabies and the unacceptable suffering of dogs and cats on a mass scale.”