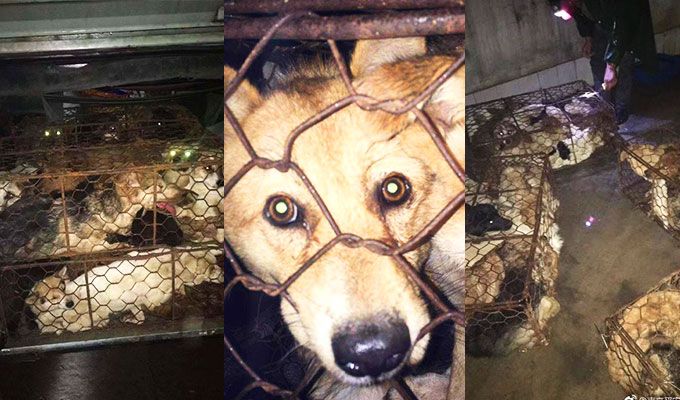 Image Credit: Ping An A Fu

Police intercepted a vehicle packed full of dogs destined to be slaughtered for the dog meat trade in Nanjing, China last week.

Heading from the Henan province in central China to Hangzhou, the vehicle was detained because the driver did not have the documentation required for transporting the dogs and could not prove where they had come from.

The police called upon Nanjing’s largest animal rescue center, Ping An A Fu (meaning Peace and Luck), to assist with rescuing the dogs. On arrival, staff from the organization discovered 108 medium to large dogs stuffed into only nine tiny wire cages.

The malnourished, hungry and stressed animals were taken to safety at Ping An A Fu’s center in the Pukou district to be quarantined. There, they received comfortable beds made of hay, water, food, and medical care.

Although all the rescued dogs survived that first night, some died later due to other medical problems.

“Most of the dogs are healthy now although some still need continued medical attention,” said Lu, a volunteer for Ping An A Fu. “Deaths were simply unavoidable as the conditions of some of the dogs when we received them were just too dire.”

Staff at the rescue center report that most of the dogs are friendly and comfortable around people, indicating that they may be beloved family pets that were swiped off the street for the horrific dog meat trade — a common occurrence throughout China.

“If it is not for the police who enforced laws strictly and saved the dogs from meat dealers, these 108 dogs would have been meat dishes,” the organization posted on Facebook.

Although animal advocates estimate that the popularity of eating dog meat throughout Asia is decreasing, around 20 percent of China’s population continues to consume it, believing it to be good for their health. Their consumption accounts for half the dogs slaughtered in Asia every year.

Thanks to the Nanjing police and the amazing team at Ping An A Fu — who currently care for more than 10,000 animals — these lucky pooches will be heading for a much better life.