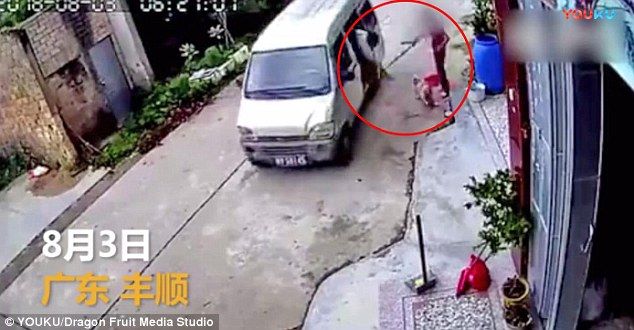 A quick reaction from a woman in China saved her beloved dog from the clutches of dog-snatchers this week – keeping the pooch safe at home and out of the horrific dog meat industry that is rampant in the nation.

Video footage shows the woman sweeping on the roadside, with her dog happily keeping her company. A white van speeds past and a noose is thrown out in an attempt to lasso the dog – but the woman reacts quickly, using her broom to hit the suspect’s arm and keep her dog safe.

The incident happened in the town of Tangkent, Fengshun county, in southern China’s Guangdong Province, where dog theft is common. In February, residents in this area assaulted a suspected dog thief after they caught him stealing their pets.

China is the world’s largest consumer of dog meat – Animals Asia estimate that around 10 million dogs are killed for the dog meat trade throughout the country every year.

Many of these animals are beloved family pets, snatched from the streets by dog thieves. They undergo extreme suffering as they are transported to the dog meat markets, where they then suffer unimaginable horrors before being beaten to death or boiled alive.

Although some dogs are raised on farms, it is more profitable for sellers to grab animals from the streets.

“You can’t make a profit raising a dog for meat because it costs too much to feed,” says Chinese animal activist Han Yingjie. “But if you steal a dog, then you can turn a profit.”

The popularity of dog meat in China is waning, with only around 20 percent of the population still regularly consuming meat – mostly due to a belief that the flesh is a natural health remedy, particularly related to sexual potency and endurance.

With countless dogs poisoned, killed and snatched by thugs from the dog meat industry, it’s nice to know that this pooch is in safe hands with a vigilant guardian.