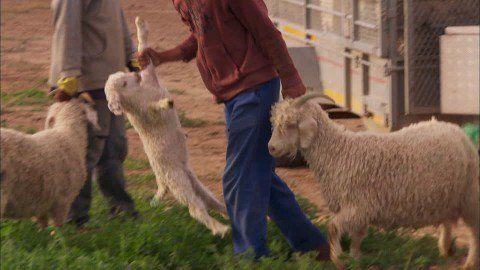 Major retail clothing chains including Zara, Gap, H&M and Topshop have promised to stop the sale of garments containing mohair after animal rights activists revealed shocking acts of animal cruelty occurring in a number of goat farms in South Africa.

People for the Ethical Treatment of Animals (PETA) launched the first ever investigation into the mohair industry, inspecting 12 different farms with disgraceful results.

Video footage exposed workers physically dragging animals by the horns or legs, lifting them right off the floor by their tails, and forcibly throwing them onto the ground.

Sometimes the animals were killed after being shorn, with witnesses stating that a worker had slowly cut the necks of conscious goats with a blunt knife before breaking their necks.

Mohair is made exclusively from the hair of Angora goats, and is commonly used in the production of sweaters, coats and scarves. More than 50 percent of the world’s mohair is sourced from South Africa, where farm employees are paid by the amount of mohair they can produce, rather than receiving an hourly wage – encouraging them to work quickly and carelessly.

Although these major clothing lines were shocked by the investigation findings, it will be a slow process to phase out mohair, with H&M planning to ban it throughout all 4,700 stores by 2020, and Zara working towards the same deadline.

“The supply chain for mohair production is challenging to control – a credible standard does not exist – therefore we have decided to ban mohair fiber from our assortment by 2020 at the latest,” said Helena Johansson, a spokeswoman for H&M.

Five years ago, the same companies discontinued the sale of Angora rabbit fur, following PETA’s video footage of the cruelty inflicted upon rabbits in Chinese farms.

This more recent ban comes not long after major fashion designers like Gucci, Versace, Michael Kors and Ralph Lauren, among others, pledged to stop using animal fur in their ranges.

PETA now plan to make a formal complaint with the US Department of Agriculture.

“The most effective way to prevent goats from suffering and dying in the ways we’ve seen is by going directly to retailers and consumers,” said Dan Paden, director of evidence analysis at PETA. “What’s ultimately going to keep more goats from going through this is when retailers pull their support for the industry, and informed consumers leave the mohair products on the shelves and buy something else that doesn’t have as much cruelty woven into it.”

We urge these retailers to stop using mohair now, rather than supporting animal torture for another five years.