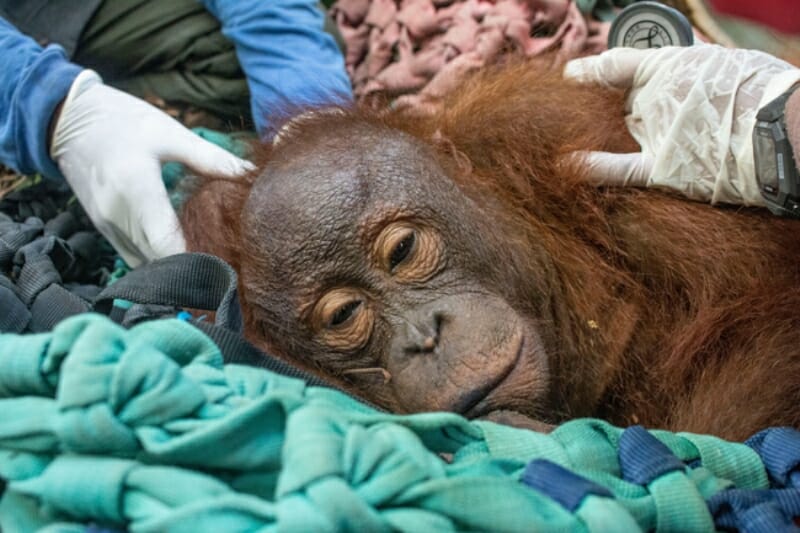 On 8 May a rescue team carried out a successful operation to save the life of a young orangutan who had become stranded in a village in West Borneo.

Residents of Riam Berasap Village in North Kayong Regency had reported sightings of an orangutan in their sugar cane fields in April.

Members of International Animal Rescue visited the village and confirmed the presence of a four-year-old orangutan — later named Riam by his rescuers —  who was trapped in an area surrounded by roads and houses.

A team of wildlife officials from International Animal Rescue (IAR), the Natural Resources Conservation Centre (BKSDA) and Gunung Palung National Park (BTNGP) was then set up to rescue Riam from his predicament and take him back to his natural habitat before any harm could come to him.

When the rescuers arrived, Riam was in a tree, so the medical team had to sedate him so they could safely remove him from the situation. After the team hit Riam with an anaesthetic dart, the unconscious orangutan fell from the tree and the rescuers were able to catch him.

Happily, Riam seemed to be in good health. “The condition of this orangutan looks good,” said Dr Temia, a vet from IAR. “But we need to do further tests, particularly as he is still very young.”

The rescuers took Riam to IAR’s Orangutan Conservation Centre in Ketapang where he will be kept under observation and will undergo further health tests.

Orangutans are an endangered species, with numbers believed to have declined by up to 50% over the last decade. Uncontrolled forest fires are partly responsible for Riam’s situation, as they destroy and fragment the wild habitat of orangutans, forcing them to wander into villages in search of food.

“The orangutan conflict that occurred around the area of the National Park was largely caused by habitat fragmentation due to forest fires,” explained the head of the BTNGP, Ari M. Wibawanto. “Our shared challenge for the future is how we can provide new habitat for orangutans. It is expected that all parties, the government, NGOs and commercial companies, can strive to create a habitat that is connected, not fragmented, so that the orangutans can survive.”