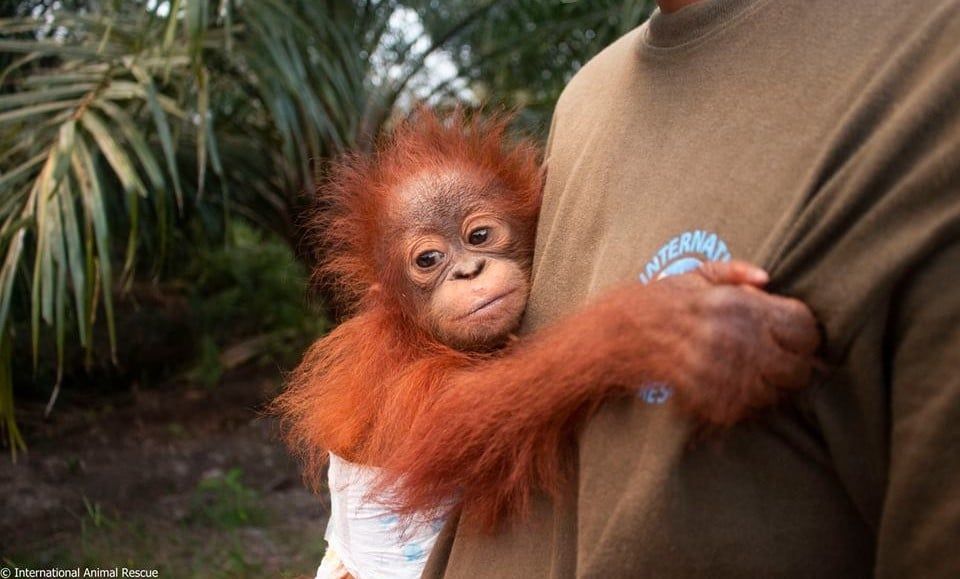 The animal welfare group International Animal Rescue recently rescued a terrified baby orangutan after he was found all alone on a palm oil plantation in Borneo, Indonesia. The tiny little darling was heard crying for his mother and hiding among the palm plants; he was terribly frightened and bewildered.  When the baby orangutan was first discovered there was still some hope that the mother could be in the area and might come back for him. But it soon became very clear that the she was nowhere to be found and the little one would die if not rescued. 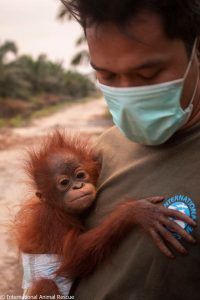 IAR estimates that the wee orangutan, whom they named Rahman, is just less than a year old. It is heartbreaking to think of such a tiny baby all by himself and alone — and no one knows for sure how long he was by himself on that plantation or what exactly happened to his mother.

Female orangutans are fiercely protective of their infants and never leave them willingly. Tragically, it is most likely that his mother has been killed due to human-wildlife conflict, which is all too common throughout Indonesia.

Little Rahman is now in recovering at IAR’s Orangutan Rescue and Rehabilitation Center in Ketapang, Borneo. He is receiving treatment for dehydration, as well as a nutritious diet to build up his strength. He was very malnourished and clung to the orangutan keepers, just as he must have clung to his mother until she was taken from him. To try to provide him with a little bit more comfort, the rescue gave him a huge soft teddy bear to cuddle up to in place of the warm body of his mother.

This baby orangutan has suffered terrible trauma and loss, and will need constant comfort and care during the weeks and months ahead. The number-one priority right now is to help him recover from the dreadful nightmare he has been through, and help him grow healthy and strong for the long road that lies ahead. Rahman has completed his time in quarantine and is now spending time with a female orangutan named Rika, who also resides at the rescue center. Rika is a very sweet orangutan, and the rescue center is hopeful that she will prove to be a good foster mom for baby Rahman. 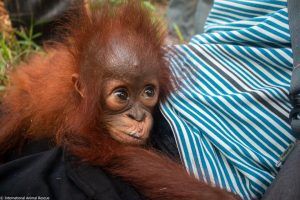 The Orangutan Rescue and Rehabilitation Center was established by IAR in 2013, with the main goal of rescuing animals from human-wildlife conflict. The center also takes in many different animals who were saved from the cruel pet trade, which is becoming an increasing problem. The main goal is to rehabilitate all rescued animals and prepare them for re-release back into the wild.

We wish this delightful little baby orangutan a speedy recovery, and many happy days in the loving arms of the caretakers who work at IAR’s rescue center. Hopefully one day this tiny sweetheart can be released back into the wild Indonesian rainforest, and help carry on the survival of this wonderful species.