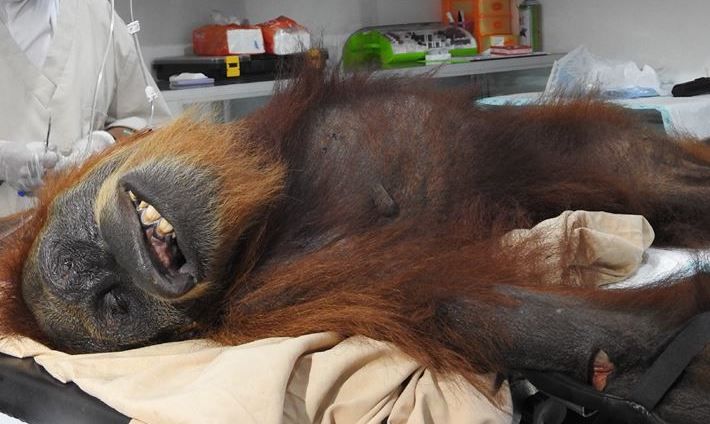 UPDATE (5/3/2022): We sent our petition, signed by more than 28,750 people, to the President of Indonesia. Thank you to everyone who raised their voice for this innocent Orangutan mother! Unfortunately, despite multiple checks back, we were unable to obtain additional information on this tragic death. We will continue to do all we can to advocate for animals everywhere! —Lady Freethinker Staff

On the Indonesian island of Sumatra, a mother orangutan named Hope was ruthlessly shot at least 74 times with an air rifle.

Bullets tore through her body, permanently blinding her and shattering her collarbone. Multiple bones were fractured, with two bullets lodged in her right eye and four in her left. It is also suspected someone slashed through her flesh with a sharp object. Deep cuts ran through her right arm, left finger, and right leg.

Due to her injuries, Hope was unable to properly nurse her baby, and the little one was severely malnourished when the two were discovered.

It was too late to save Hope’s baby, who died as they were being rushed to a clinic for emergency treatment. Hope will not be able to be returned to the wild.

Shooting animals with pellet guns is a major problem in Indonesia. The individual behind this gruesome assault needs to be held accountable for their crime. It’s imperative that animal cruelty is not tolerated.

Sign this petition urging Indonesian President Joko Widodo to do everything in his power to bring the person who committed this heartless and disturbing act to justice.