Workers Who Kicked, Punched, and Stomped On Turkeys At ‘Humane’ Farms Charged with Cruelty 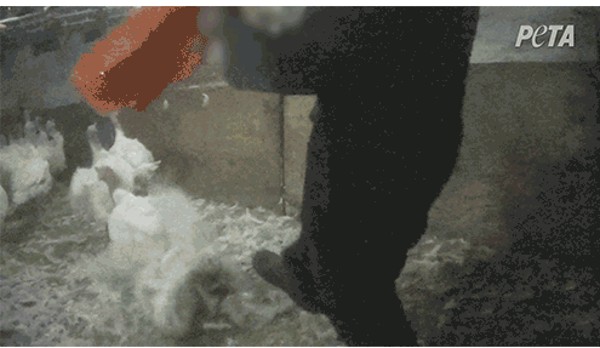 Eleven workers of the nation’s top industrial turkey producers — which markets “humane” treatment of animals — have been charged with animal cruelty, following a Pennsylvania State Police probe and an undercover investigation by the People for the Ethical Treatment of Animals (PETA).

Plainville Farms, which claims animals are “humanely” raised in “stress free” environments and supplies stores including Publix and Wegmans, employed the workers to capture and crate turkeys destined for slaughter.

With workers slaughtering a reported 90 million pounds of turkey in 2021 and with each weighing around 40 pounds, an estimated 2.25 million sensitive turkeys were killed.

The undercover footage revealed workers kicking, stomping and beating the animals at farms in Chester, Cumberland, Franklin, Fulton, Perry and Union counties, with the most cruelty charges PETA said it’s seen in a livestock case to date.

The police investigation started in August 2021 after PETA filed a complaint with the Federal Trade Commission (FTC) about the animal abuse, drawing on documentation from an undercover investigation at the farm, according to the AP.

The investigator did not participate in the abuse and instead gently herded the birds — earning chastisement for “taking too long,” PETA Vice President Dan Paden told the AP.

“We believe that it’s important for incidents like this to come to light in order to challenge our industry to do better,” Goodman said.

“Nothing can take back the suffering that all these helpless and gentle turkeys endured at Plainville Farms, but these charges show other meat companies that cruelty has consequences,” Paden told the Gettysburg Connection. “PETA encourages anyone upset at what these battered birds endured to avoid complicity in the abuse on factory farms by choosing vegan meals.”

Numerous other companies that claim to “humanely” raise animals — including having labels, welfare certifications, or images that imply animals spend their days roaming and grazing in green pasture — also have been exposed in recent years for horrific animal suffering.