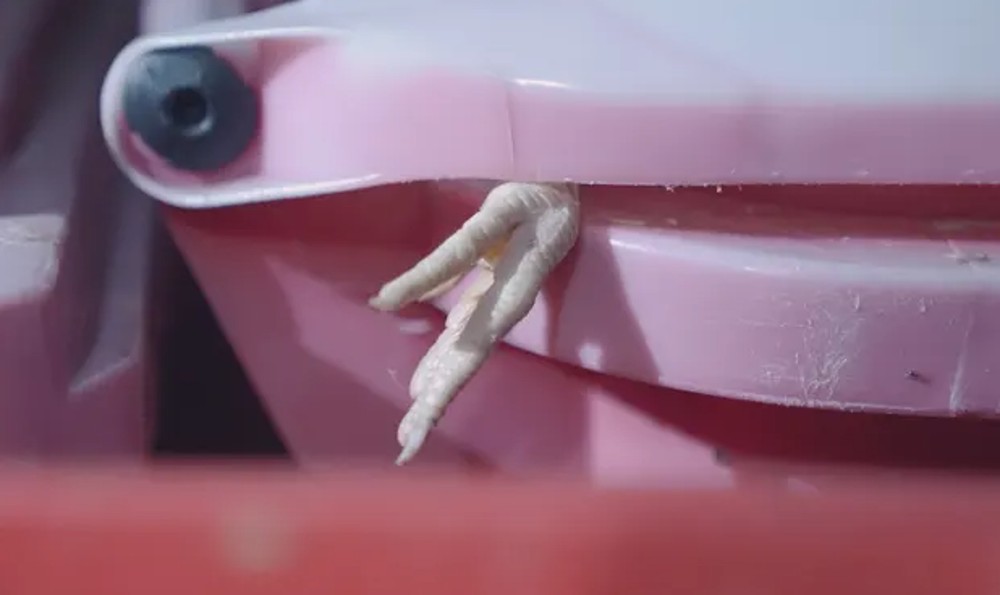 A marketing video featuring chickens housed in a shed with plentiful clean straw and also seemingly provided with perches and other enrichment sparked an undercover investigation that has revealed starkly different conditions, including severe overcrowding and dead and injured birds left lying on sparse, filthy floors, according to The Guardian.

In February, the UK-based vegan food company Vegan Fried Chick*n (VFC) sent an undercover investigator to the poultry farm, featured in the Behind the Bucket film that has been watched more than a million times on Twitter.

The investigator, accompanied by VFC co-founder Matthew Glover, documented sodden floors, feces, and sick, lame, and injured birds left to languish, as well as bins containing dead birds. Andrew Knight, a professor with the University of Winchester’s Center for Animal Welfare who reviewed the footage, also described s “little to no environmental enrichment,” , according to  The Guardian.

KFC’s response to the footage was that they would work with the producer, The Guardian reported.

Glover said the “disingenous” marketing campaign was the worst he had seen in a long time.

“This portrayal of chicken farming is utterly misleading and seeks to reassure the public that all is well, when nothing could be further from the truth,” he said.

Glover took the time to answer several questions about the undercover investigation, the true conditions for chickens in the UK’s intensive animal agriculture operations, and whether VFC plans more exposés to show the horrific realities for animals trapped in factory farms. 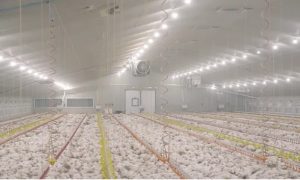 A Q &A with Matthew Glover, Co-Founder of Vegan Fried Chick’n (VFC)

How did you first become aware of the marketing film? What was your immediate reaction? Why did you decide you wanted to take your reaction a step further by investigating the claims, and then to do so via an undercover investigator?

Like 1.5 million others, we saw KFC’s promotional film on social media, but unlike most of those people, we have been inside a lot of factory farms, and none of them looked like this one. They claimed there were perches, swings, bells and lots of hay, and we have never seen farms offer any enrichment at all before. It’s fair to say that alarm bells rang. So, we decided to see if we could find the farm, and when we found it, we decided to take a look. To see the reality of these places, you have to go unannounced. Just look at the difference between the conditions when they were expecting a camera crew and when they weren’t. If you want to know what really happens in these places, you have to go undercover.
Did the conditions surprise you, or was it what you had anticipated? Why?
We weren’t surprised at all. We would have been much more surprised had their claims about high welfare and enrichment been borne out. The truth was, the only enrichment provided was one small swing for 52,000 birds. That would have allowed each bird access for one second during their lives, assuming they weren’t too lame to get on it … and many were. No, this was a typical chicken farm, and just as horrific as all the rest.
What was most shocking to you about the footage? What do you feel would or should be most shocking for people in society today?
The most shocking thing is this is how billions of birds spend their entire lives. This is what almost every chicken farm in the country, and in many other countries, looks like. Vast warehouses packed with sick, lame, ill, dead and dying animals. No enrichment. No fresh air. Birds sitting in their own filth with nothing at all that makes their lives worthwhile. It’s shocking this happens. It’s shocking people don’t know. And it’s shocking that the industry would issue a film that was so misleading. 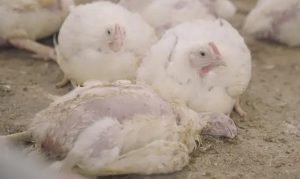 Once you captured the footage, why did you feel the urgency in exposing it?
The only way to show people what farming means to the animals involved is to go undercover and see. At the very least, farms clear away the dead and dying if they are expecting a visit, and — in this case — they had provided straw and perches that were removed again, perhaps as soon as the filmmakers had left the building. This is not our first investigation. It’s our seventh, just in the last 18 months.
Our first was to take our chef and co-founder Adam inside a typical farm. He has cooked, eaten and served chickens for years, and this was utterly shocking to him. He is now vegan, and has converted his restaurant to fully vegan, too. Then we did a series called Five Farms where we took well-known people and influencers inside five different farms so they could see for themselves how bad things are. Actors Evanna Lynch and Peter Egan were among those to put themselves through the emotional ordeal. And then, when we saw the claims made in the KFC film, we knew we would have to go undercover again. Our film that reveals the truth has now been seen four times more than the original KFC promotional film, making it a huge own goal for KFC.
What response if any do you have to the companies’ assertions that an undercover investigator being in the shed could have “affected” the birds’ behavior, or that the dead birds filmed are only the “small number” of birds who die in between vet checks?
Us being in the shed did not remove the straw, perches, bells and swings we were all assured the birds had! Us being in the shed made no difference to the number of sick, lame and dying animals, nor did it fill up those bins outside with the victims of this pitiless business. In fact, the birds acted pretty normally around us, which is not surprising as farm workers go in each day, so they would be used to people.
As for the “small number” of birds who die, this is an appalling example of greenwashing. We saw the paperwork at the farm for ourselves, and so we know that the actual number of birds who die on that one farm every 40-45 days is 13,634. I don’t think anyone would think that is a small number.
Will VFC be planning more undercover investigations?
We will always do all we can to expose the horrors — and environmental impact — of factory farming. We are an activist brand that sells food. Our job is to expose the cruelty and suffering inherent in the farming system, and to give people a tasty alternative to help them move away from supporting it.