VIDEO: 2-Legged Squirrel Gets Around with Tiny Set of Wheels

When a young man in the Turkish province of Batman discovered a squirrel with her front legs caught in a trap, he immediately sprung into action to try saving her life. Nineteen-year-old Ruzgar Alkan’s logical first step was to take the injured squirrel to a veterinarian. Unfortunately, her injuries were too serious to be treated there.

The squirrel’s bleak outlook took a positive turn when Alkan connected with a man named Tayfun Demir. Demir already owned a rescue squirrel and was happy to help the injured critter. He was even willing to adopt the squirrel, who’s since been named Karamel, and who traveled about 700 miles from southeastern Turkey to her new home in Istanbul.

During her recovery, Karamel received top-quality care from specialists at Istanbul Aydin University, where she underwent two surgeries. Due to gangrene, her legs couldn’t be saved. Instead, Karamel was fitted with a prosthetic device that enables her missing front legs to be replaced with wheels.

While her wheels will take some getting used to, Karamel’s mobility has been saved, thanks to her dedicated team of caretakers and her caring rescuer, Ruzgar.

SIGN: Pass the HEART Act to Get Dogfighting Victims in Forever Homes Faster 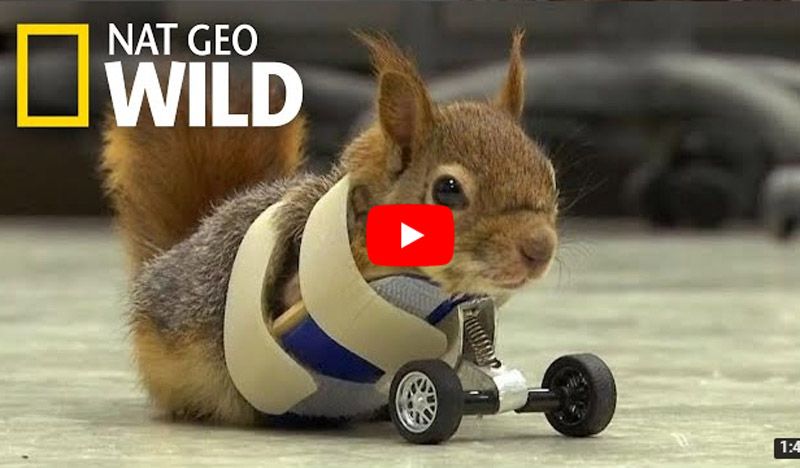 UPDATE: Officer Who Slammed K-9 Into SUV Has RESIGNED

VIDEO: Dog Finds Forever Home After 444 Days At Shelter and an Unlikely Swap