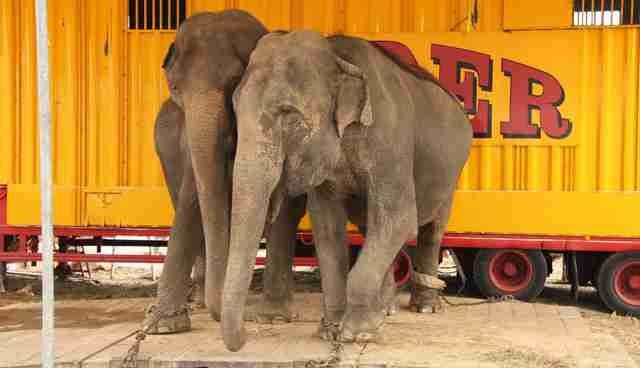 Stardust Circus has announced on social media that it will be removing all elephant acts from its shows starting now. This announcement comes after animal activist groups such as PETA worked hard to block the circus from holding scheduled shows earlier this year.

“Unfortunately activists make it very difficult to travel with animals today,” said a representative of Stardust.

The elephants previously used are owned by Carson and Barnes Circus. This outfit has repeatedly been fined by the U.S. Department of Agriculture (USDA) for failing to meet animal welfare standards over the last two decades. They have been penalised for over 100 different infractions, including not giving elephants access to needed veterinary care, not providing clean water and safe enclosures for their animals, and mishandling the elephants under their care.

Habi Omar, an elephant trainer who works with Stardust, has previously been filmed abusing the elephants with bullhooks, and reportedly uses electric cattle prods to dominate these beautiful animals.

Last year, veterinarian Philip K. Ensley performed a welfare assessment on two of the elephants, Libby and Bunny, leased out to Garden Bros. Circus from Carson & Barnes. The report summarized that the elephants were “abused, injured, harmed and harassed, suffering physically, in a state of psychological deterioration, and compromised welfare attributable to their standard of care and living conditions controlled by use of a bullhook.”

Captive elephants are prone to a variety of health problems, most notably foot health issues. Lack of appropriate exercise on natural substrates combined with long periods of standing on hard surfaces such as concrete can cause lifelong damage to the feet of an elephant.

Circus elephants are chained for long periods of time and forced to perform with bullhooks. They have no choice but to exhibit unnatural behaviours over and over again, day after day, before being returned to their cramped enclosures to wait for the next show.

“Their natural behavior as elephants is disrupted to the point where they experience permanent harm,” stated the above report.

Many states in America have already banned the use of elephants for entertainment. Illinois was the first state to enact such a ban, and similar bills are underway in other states. New York City has banned wild animals in circuses, and 125 other local areas have passed restrictions, as well.

In spite of this promising trend, PETA report that there are still around 50 elephants in travelling shows throughout the U.S. But thanks to the hard work of animal activists, and the willingness of the public to speak out against these cruel shows, Stardust will not be using elephants again.