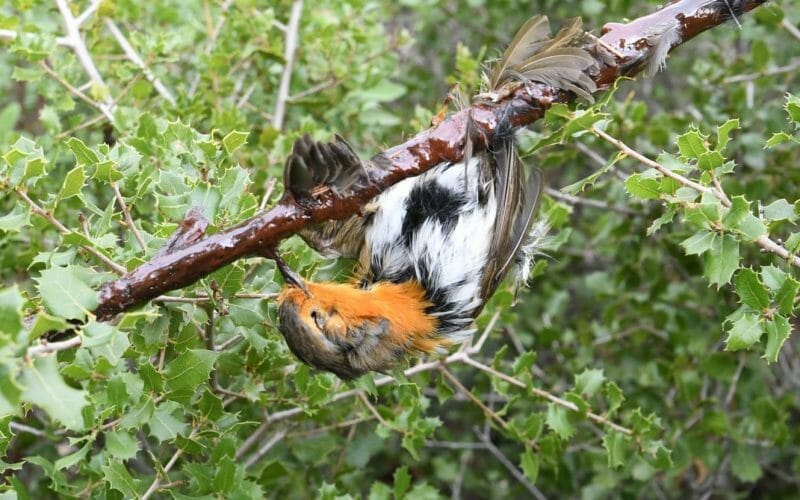 France must now outlaw the cruel practice of glue-trapping birds, per a directive from the European Union, which issued a final warning to the country following a long-fought battle to keep the practice alive.

Lady Freethinker (LFT) thanks French activists and the more than 28,000 supporters who signed LFT’s petition urging the French Ambassador Philippe Etienne to help end cruel glue trapping and push for a nationwide ban against the inhumane and outdated practice.

The new measure will save countless lives throughout southern France, where roughly 5,000 glue trappers capture an estimated 40,000 birds annually, according to the French Bird Protection League (LPO).

Glue-trapping has fallen under increased scrutiny recently, after the LPO produced undercover video evidence showing that the practice puts endangered species at increased risk, prompting the European Commission to take action. The EU imposed an October deadline for banning glue-trapping, threatening legal action and fines if the country remains non-compliant.

The European Union banned glue-trapping, or chasse à la glu, several decades ago with the 1979 Bird Directive. Until recently, however, France utilized legal loopholes and found exceptions to the glue-trapping ban under certain circumstances. Arguing that it’s “traditional,” France continued the practice in five of its southeastern departments despite mounting pressure from the EU to do away with the cruel hunting method.

Glue trapping is agonizing for birds, who are lured to adhesive-covered branches, get stuck, and desperately try to free themselves in a painful, prolonged struggle that can eventually result in death. When their captors return, the trapped birds are separated from the glue with toxic chemicals, often causing further injury or death. Some birds are deemed “undesirable” and are carelessly tossed aside and left to slowly die.