Champ — a beautiful young mastiff who was starved nearly to the point of death by a spiteful ex-girlfriend in August — has fought his way back to health and found an awesome new forever home.

Rescuers, veterinarians and foster carers with Rescue Dogs Rock NYC have spent the last few months nursing the traumatized dog back to health and showering him with much-needed love and affection; and Champ has finally headed to his new home with a loving couple in Delaware.

As shockingly reported in an LFT petition in August, Champ was found with maggots in his mouth and all over his body, weighing only half his normal weight. Elizabeth James — his “guardian” at the time — left him chained up outside for at least six months in a twisted attempt to get back at her ex-boyfriend, while still feeding her own dogs nearby.

Only 50 pounds when he was rescued, Champ now weighs nearly 100 pounds and looks like a completely different animal. His miraculous and heart-warming journey has been captured and shared with fans via updates on the Justice for Champ Facebook page, which will now be maintained by his new family.

Arriving at his new home over the weekend, photos and videos show Champ chasing balls in the park, napping, and getting lots of cuddles from his guardians – a far cry from the skeletal, terrified dog we met several months ago. 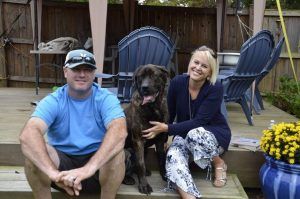 Champ’s story very nearly ended in tragedy, and we are so happy to report that he is now healthy and loved; however, we have yet to see if his abuser will receive a fitting sentence for this crime. Her trial date is set for October 19 and we hope to see justice served for Champ to show that this kind of horrific cruelty will not be tolerated.