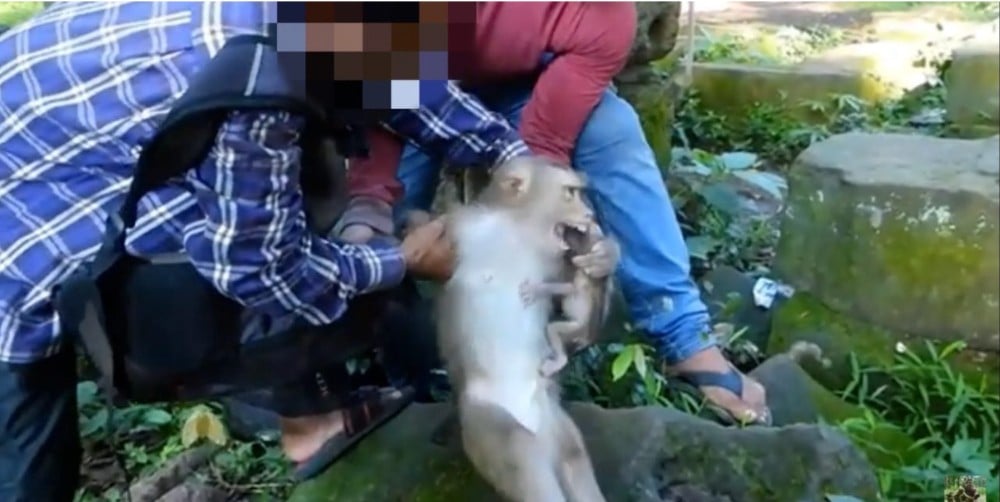 Cambodian authorities are asking the public to help stop cruelty and exploitation of vulnerable macaques at the Angkor Wat temple, following an investigation and campaign by Lady Freethinker (LFT) and Action for Primates (AfP).

In October, APSARA — the national authority that oversees the temple — posted a public announcement on their website urging people not to feed or record the monkeys and promising legal action against anyone who abused the monkeys, according to a translation provided to LFT.

The announcement refers to “highly inappropriate and very concerning” activities exposed by our joint campaign.

“In order to maintain the harmony of wildlife in Angkor Park, we would like to request the cooperation from the public and relevant authorities working together to prevent all these inappropriate activities that have been negatively impacting management of Angkor Park, which affects national pride and honor,” the agency wrote. “At the same time, we urge national and international tourists to stay away from the monkeys and wildlife to avoid any harm.”

APSARA also promised to take legal action against anyone who committed crimes against monkeys — “without exception,” according to the translation.

“We welcome this important announcement and hope there will be a positive outcome for the free-living macaques at Angkor Wat,” said AfP Co-Founder Sarah Kite.

Earlier this year, LFT and AfP sent an investigator to the temple to document horrific treatment of the monkeys — including by video operators who purposefully put the innocent animals into distressing situations and filmed them for social media views.

In one of the cruelest videos, people forcibly held back mother macaques while separating them from nursing babies, who were stuffed into backpacks. In other videos, people followed the monkeys, shouted at them, or prodded them with metal rods.

LFT, AfP, and Stop Monkey Abuse Asia alerted APSARA and UNESCO about the abuse via a formal letter in August, along with a reminder that Article 49 of the Cambodia Forestry Law prohibits harassment or harm of wildlife.

“Not only is the situation incredibly inhumane, (but) the deliberate staging of a conflict situation and asking for donations to intervene is fraudulent,” that letter stated. “It is obvious that the operators are only interested in creating ‘drama’ for filming, rather than looking out for the welfare of the captive individuals.”

LFT followed up with an investigative report to raise awareness about the monkeys’ plight and a petition, signed by more than 35, 000 people, which we sent to authorities urging action.

“We’re thrilled to hear that authorities plan to take action to stop the abuse of macaques and other wildlife, and we thank our more than 35,000 supporters for signing the petition to help these sensitive and intelligent beings,” said Nina Jackel, Lady Freethinker Founder and President. “We will continue to monitor the situation in Angkor Wat to ensure officials live up to their promises and protect these extraordinary animals.”

If you haven’t already, please sign our petition urging Cambodian authorities to continue to monitor the Angkor Wat temple for mistreatment of animals and to immediately and decisively crack down on any violations.