Macaques are Being Terrorized for Social Media Views in Angkor Wat

In Angkor Wat, the most famous ancient temple complex in Cambodia and an UNESCO World Heritage Site, macaques are being exploited and terrorized for social media views. They’re harassed and stalked by people with cameras who sometimes shout and prod them with rods.

Video makers are deliberately causing stressful and distressing situations for the monkeys and are disrupting their social groups. They’re feeding them, following them around, and looking for ways to create trending content for social media.

An investigator for Lady Freethinker and Action for Primates who visited the Angkor Wat complex was shocked to see the way that video operators interfered with the monkeys, following and chasing them around the complex with their cameras. They also had concerns about the fruit stalls and roaming motorbikes selling food for tourists to hand feed monkeys. Much of the feeding took place along the side of the road as cars pulled in full of tourists, including young children. Such situations are potentially dangerous for children and the monkeys who were in danger of getting run over or injured on the roads.

One of the cruelest videos recently posted on social media shows female macaques being forcibly held while babies were removed and placed into backpacks in what appears to be an attempt to swap babies. 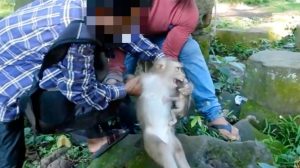 Other videos show the animals being relentlessly stalked by people with cameras who shout and prod them with metal rods. There have also been reports of video makers staging “rescues”, as well as releasing monkeys who have been raised as “pets” into the existing population, which puts these animals at serious risk for injury or death.

These animals are typically fearful of humans, but the artificial feeding of them has made them less afraid of people, so that they may become aggressive towards people in searching for food.  The harassment of the macaques also is likely to make them even more aggressive. Furthermore, close contact with the macaques puts humans and macaques at risk for disease transmission between them. It is crucial that people do not interact with or harass the macaques. The feeding of the macaques at Angkor Wat should be prohibited. Cambodia already has a law against capturing or harassing wildlife and it should be strictly enforced 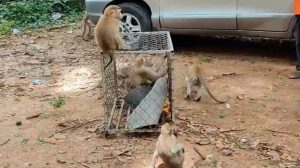 Lady Freethinker and Action for Primates are urging The United Nations Educational, Scientific and Cultural Organization (UNESCO) to stop this inhumane, unlawful exploitation of macaques immediately. Everyone can sign the petition here.