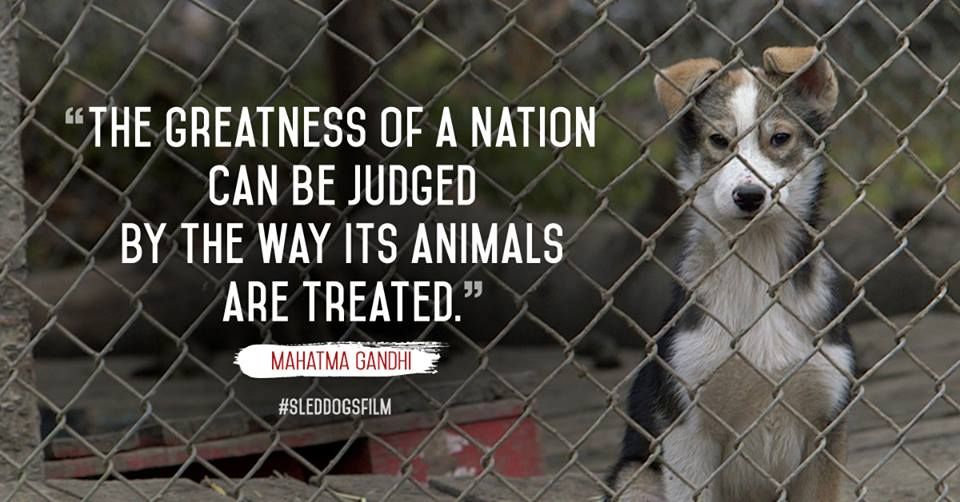 Levitt made the film after going dog sledding for fun one day in Toronto. She innocently wanted to play with the dogs, and went down the street searching for their living quarters. Horrified, she found them chained outdoors, tails tucked miserably between their legs, in what she calls a “virtual concentration camp of dogs.”

“Three-hundred dogs, all on chains, in a dilapidated shelter…if you can even call them shelters,” she said in an interview with Lady Freethinker.

From there, Levitt began researching and documenting the industry as a whole. And what she found is shocking. 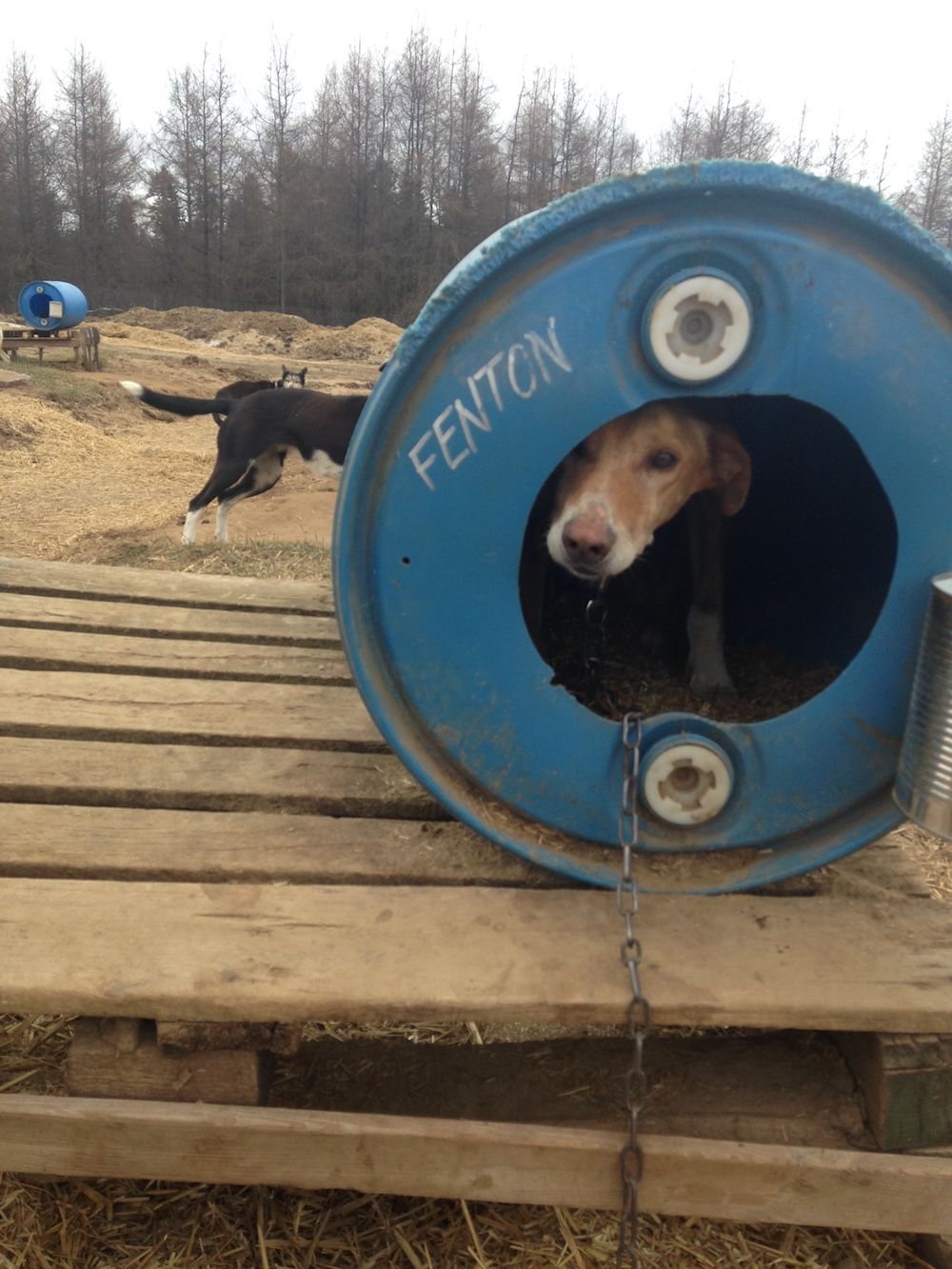 The documentary begins with a quote by Mahatma Gandhi reading, “the greatness of a nation and its moral progress can be judged by the way its animals are treated.” The white printed words speak to each individual viewer, challenging our own ‘moral progress.’

As the quotation fades out, harrowing instrumental music brings the viewer into the harsh life of a sled dog. The camera zooms in on a chain scraping around a metal pole as the dog attached pulls against it. As the uncomfortable sounds of scraping metal on metal forebodes the true extent of animal cruelty yet to be revealed, the music abruptly stops and a feeling of dread creeps in.

After only the first few minutes, Levitt has thwarted the consumerist propaganda of dog sledding and brought the viewer down to earth to see the “sport” for what it really is.

The film focuses heavily on the famous Iditarod race, in which 85 mushers compete for hundreds of thousands of dollars in prize money. Iditarod dogs are trained to run an unforgiving distance of 1000 miles in freezing cold weather and across the harsh terrain from Settler’s Bay to Nome, Alaska.

“It’s like running 4 marathons a day for humans,” says Levitt.

The dogs are literally worn down to the ground; as many as 140 sled dogs have died running the race.

The camera pans intently over the cheering crowd of the 44th Iditarod race in 2016 and focuses on an individual wearing a fox fur hat, with a stuffed fox head still attached. He stands in the cold, cheering on the mushers as they set out for their grueling journey.

Former Iditarod musher Lance Mackey speaks of the ‘Last Great Race’ with an animated tone. He talks of its important role in culture and tradition, even though the original historic event of 1925 never required such physical and emotional torment of the dogs, who pulled the sled in relays of 100 miles only. With a light-hearted tone of ignorance or denial, Mackey snickers and says, “everybody loves dogs.”

As the fans cheer on the sled dogs and mushers with pure admiration, they cheer on an event that condemns the dogs to a live of enchainment and torment. By simply filming the cheering crowd, Levitt confronts the viewer with the bitter reflection of humanity. There is a sense of guilt, for simply being human, that is unavoidable.

The documentary follows musher Patrick Beal as he completes the Iditarod. In one scene, Beal even refers to his dogs as a “well-oiled machine.” This unnatural metaphor disregards the emotional and physical well-being of the dogs as it reaffirms them as a tool of entertainment and money. Although Beal acknowledges the importance of the bond between him and his dogs, his concern is very clearly to win the race.

Some of the most disturbing scenes are those of commercial sled dog kennels. In Moonstone, Ontario, one kennel owner is filmed handling her dogs and sharing her opinions on how best to treat them. In every shot in this scene, the pained sound of barking and howling can be heard as the dogs sit, tethered to their tiny wooden crates.

In another disturbingly ironic scene, Gena Pierce, owner of the Windrift kennels, talks of the love and care she has for the dogs as she forcefully pushes a collar over the face of Lydia, a six-month-old pup. Lydia squeals and pulls away from Pierce’s grip with a desperation that is truly upsetting to witness. Oblivious to Lydia’s pain, Pierce simply remarks the pup has “such a tiny neck.” 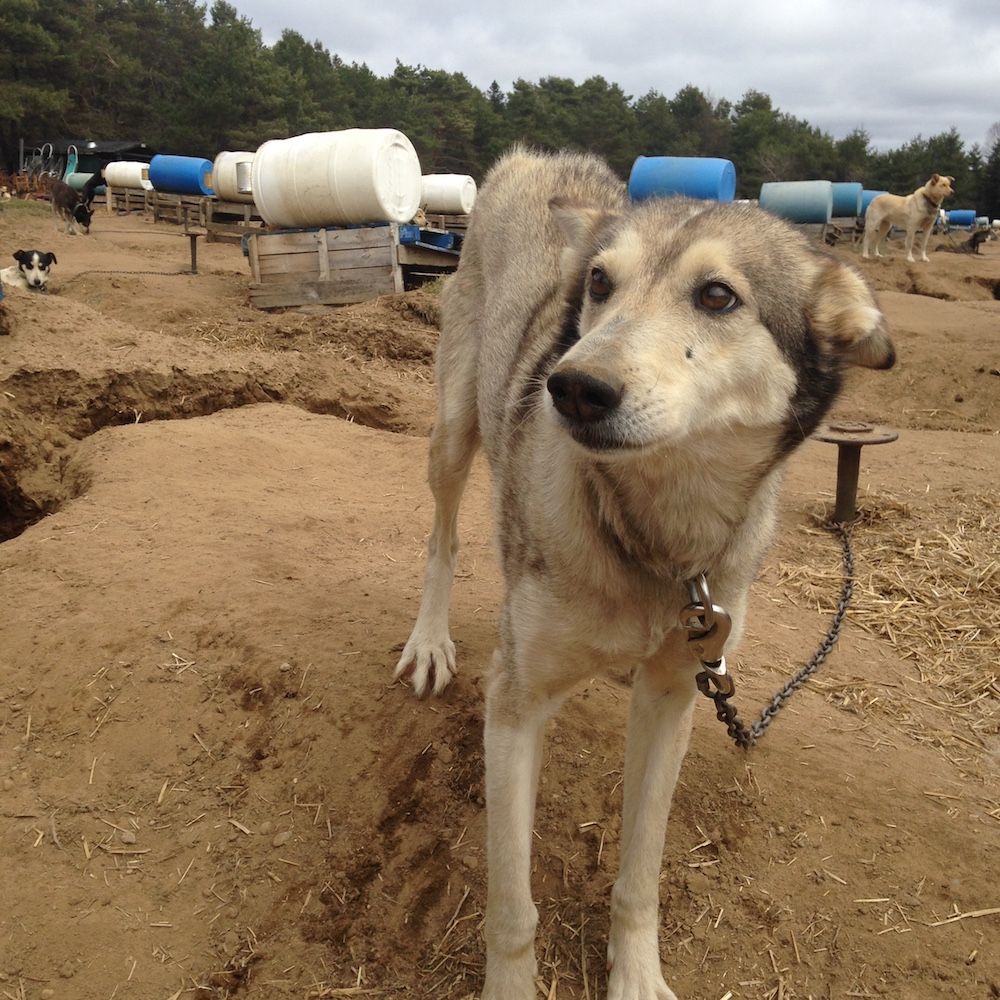 Lydia is then dragged, struggling, to the kennel, surrounded by agitated dogs chained to poles. Having been tethered for most of their lives, the dogs are nervous and aggressive. They lash out at Lydia, biting at her several times as Pierce laughs and explains that they can get a bit excitable sometimes. The viewer can hear Lydia’s constant squealing, a deeply unnerving sound. The pup is then chained to the pole where she will likely spend the rest of her life. The camera zooms in on Lydia’s chain, scraping against the pole as Lydia runs around and around in a futile sprint for freedom.

The documentary tears down the common assumption that sled dogs are naturally fit for a 1,000-mile race and reveals that they suffer traumatic, forceful, and brutal training. There is nothing ‘natural’ about their running the Iditarod. Even Beal admits that after a few days of running, their personalities change. The sled dogs are filmed lying in the snow, unable to pick themselves back up again as they suffer from severe exhaustion, stomach ulcers, vomiting, and diarrhea among other severe symptoms. As a veterinary professional strongly advises Beal to leave one of his dogs at a checkpoint where he can be medically cared for, he is reluctant to listen, even after she suggests that his heart might soon fail.

As the sled dogs make their way across the brutal terrain to Nome, Levitt turns the viewers’ attention to Krabloonik in Snowmass, Colorado — the largest dog sledding reservation in the lower 48 states. It is summer 2008, and the Krabloonik dogs are baking in the sun, tethered on short chains to their primitive wooden crates.

Former musher Zack Mills nods sadly to himself as he recalls the depressing sight, and compares the kennels to a concentration camp. He shudders as he remembers how the dogs would eat their own shelters and water bowls due to extreme boredom and, in some cases, insanity.

Former Krabloonik owner Dan MacEachen was eventually charged with animal cruelty, and new owners have taken over the kennels. Nonetheless, it remains a commercial facility with hundreds of dogs raised for profit.

Sled Dogs also addresses Robert Fawcett’s mass slaughter of 100 sled dogs at Whistler kennels in British Columbia following the 2010 Olympics. In the documentary, forensic scientists visit the scene of the crime and recover the bodies from the ground, one by one, discovering the extent of the suffering the dogs endured before they died. Many were shot multiple times, beaten to death and worse. As the deceased bodies of the 100 dogs are dug up from the ground, so are the horrific truths of the massacre.

Shockingly, after a probationary period of only three years, Fawcett can now legally own another dog sledding company.

“It’s legal, in the United States and Canada, to kill a dog, as long as you do it ‘humanely,” says Levitt. In fact, she says dogs are commonly “culled” if they are sick or when they retire.

Back to Beal, finishing the Iditarod. Cheered on by an enthusiastic crowd, the musher struts around, signing autographs for eager fans. The welfare of the dogs has been willingly sacrificed for money, fame and glory.

Levitt has directed an eye-opening and honest film about dog sledding, exposing the cruelty inflicted by kennel owners as well as by mushers in their quest for victory and renown. While so many had protested the horrors of the Robert Fawcett massacre, the same brutalities continue today.

The bottom line is clear: it is simply not possible to run a dog sledding company that is both profitable and humane.

Backlash from the dog sled industry came swiftly after the film was made. When Sled Dogs premiered at Whistler Film Festival, the Iditarod threatened to sue the festival just for showing it.

“They’re scared this is going to become the next Blackfish,” says Levitt, referring to the killer whale exposé credited for Seaworld’s plunge in attendance (and revenue).

Indeed, Blackfish may be an accurate comparison. After viewing Sled Dogs, Wells Fargo and State Farm Insurance have pulled out as Iditarod sponsors. Perhaps others will soon follow suit.