Kitten Rescued After Hanging by the Neck Under Crawlspace for Hours 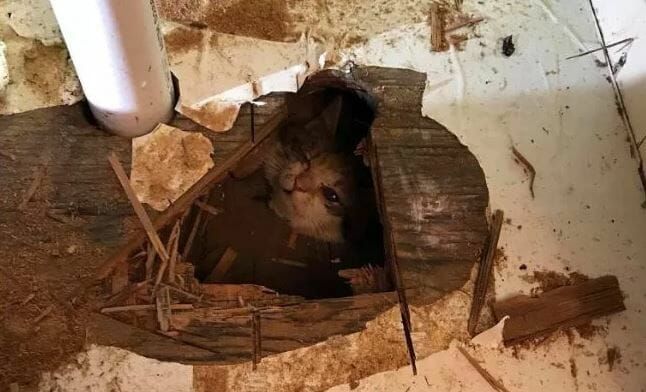 It was a lucky end to a harrowing day for a kitten trapped, hanging by her neck in the crawlspace of a house in Saginaw County, Michigan, last week.

Courtney Neiderquill returned home from work on the 9th of February and could hear the cries of a distressed kitten. Tracing the sound to a cupboard under the kitchen sink, she discovered a small kitten stuck under the floorboards, its head trapped in a hole. “We looked under the cupboard and you could see there was a tiny hole and its head was popping up through it,” Neiderquill said.

Unable to get the cat free herself, Neiderquill called the Thomas Township Fire Department, who cut into the wood and discovered the cat was well and truly stuck, her neck wedged in the hole and the rest of her body dangling underneath. The fire department was able to cut her free and get her safely to the Saginaw County Animal Care and Control centre.

Escaping the cold wind and snow was this kitten’s top priority – she’s just lucky she didn’t get hurt trying to find a warm place to snuggle up away from the freezing storms in the area. In fact, the shelter say they found her in surprisingly good condition considering she’s only about four months old and almost certainly a stray.

Jessica Herzog, an employee at the Saginaw shelter said, “She could have been injured very badly because she was hanging like that for a while and to be able to get her out the firemen had to use their tools and cut around to get her out. She’s incredibly lucky…a strong little girl.”

The kitten, now named Muffin, has been in the loving care of the shelter since the incident. It looks like she chose the perfect house to get stuck in, as her rescuer Courtney said that she was more than likely going to adopt Muffin.