This Zoo Is Finally Closing Its Cruel Elephant Exhibit for Good 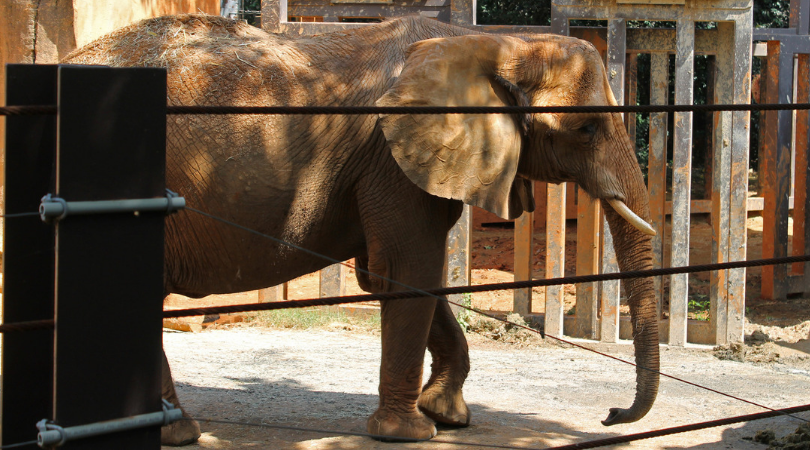 Riverbanks Zoo and Garden in South Carolina have announced their intention to shut down their elephant exhibit and send the two remaining elephants to a new facility.

In a Facebook post on June 19, the zoo stated that they were working with the Association of Zoos and Aquariums (AZA) to find a suitable placement in a new herd for 48-year-old Robin and 37-year-old Belle.

Between December 2016 and May 2017, two elephants died in the facility. 44-year-old Petunia collapsed in her exhibit due to severe arthritis and was euthanized. Later, 37-year-old Penny died of unknown causes.

The zoo acknowledged that the two elephants need more space and should be integrated into a larger social group — something that isn’t possible in the current facility.

“The decision to move Robin and Belle was not easy, but it is the right decision for the animals and Riverbanks,” said John Davis, Director of Animal Care and Welfare at Riverbanks Zoo and Garden.

The news has been warmly received by In Defense of Animals, who included Riverbanks Zoo in its 10 Worst Zoos for Elephants list in 2017.

“We are overjoyed that Riverbanks Zoo and Garden has finally acknowledged that its elephant exhibit isn’t suitable for remaining elephants Belle and Robin,” said Marilyn Kroplick, president of In Defense of Animals. “When two relatively young elephants die within six months of each other, there is clearly a problem. Riverbanks Zoo is making the right decision to close its elephant exhibit, and we urge the Zoo to send Belle and Robin to an accredited sanctuary where they can enjoy peace, privacy and a more natural environment than zoos can provide.”

While the zoo has yet to announce where Robin and Belle will be relocated to, we hope that they are retired to a suitable sanctuary, where they can live out the rest of their lives in peace, as they deserve.