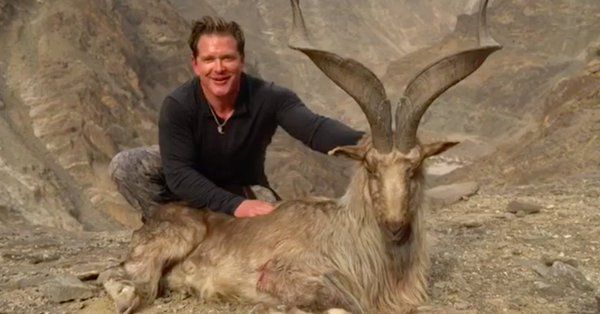 The Texan, identified as entrepreneur Bryan Kinsel Harlan, is seen making the kill in a video released by his hunting guide on Facebook.

Harlan shoots the adult markhor in cold blood as it grazes in a mountainous area right next to an infant. He then high-fives his hunting buddies before posing with this magnificent slaughtered animal.

“It was an easy and close shot and I am pleased to make this trophy,” Harlan told a Pakistani newspaper.

The markhor is the national animal of Pakistan, and there are less than 6,000 left in the wild. They are currently classified as near threatened after the IUCN downgraded their status from endangered in 2015.

Although it is illegal for most people to hunt this protected species, the government of Pakistan makes an exception for trophy hunters; this year, they auctioned off permits allowing four markhor to be shot dead.

Tarbarak Ullah was the lead guide on Harlan’s hunting trip and defends the practice as essential for the conservation of the species.

“This is not just about hunting,” said Ullah. “The number of animals is increasing, and these foreign hunters are millionaires who go back and tell the world that Pakistan is safe. Now, more and more tourists are coming.”

The Pakistani government claim that 80% of the permit fees go directly to the local communities in the community conservation areas where the hunts take place, with 20% going to the wildlife department.

But Iris Ho, senior specialist for wildlife programs and policy at the Human Society International (HSI), disagrees with the “conservation” scheme.

“The hefty price tag — $100,000 — for this hunt says it all,” says Ho. “Trophy hunting is not conservation, it is pay-to-slay killing for fun. It is an expensive hobby for the elite one percenters to kill rare and iconic animals for bragging rights. The United States is the world’s largest importer of hunting trophies, with American trophy hunters leaving a trail of carcasses wherever they go. The grotesque enterprise of trophy hunting at the expense of magnificent wild animals has no place in a modern society.”

The slaughter of even one protected animal in the name of conservation is unacceptable, and we urge the government of Pakistan to support and promote their unique wildlife ethically and sustainably instead of auctioning off their precious lives.

If you agree, contact the Pakistani Ambassador to the United States, Dr. Asad Majeed Khan, urging him to call for a ban on trophy hunting in Pakistan.  [email protected]