Home » Animals » Taming ‘Wild Princess’ – The Rescue of a Dog Who Had No HopeBy Lady Freethinker | October 6, 2017 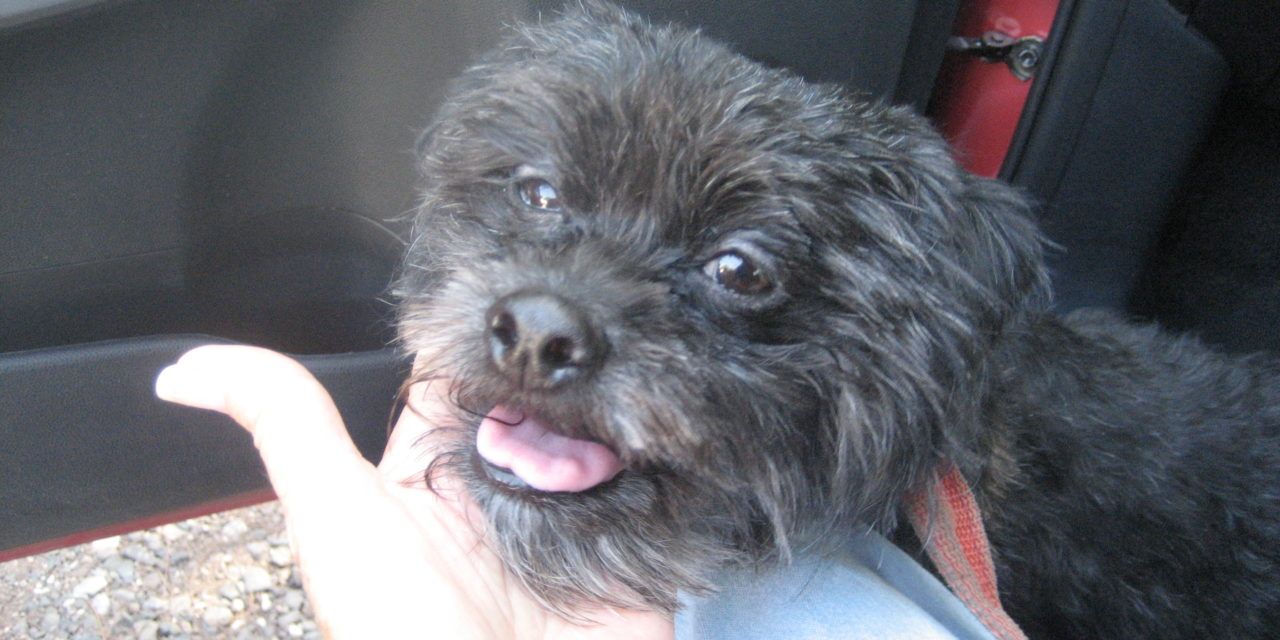 She was in the holding area, tiny and black and badly matted.  They said she was very aggressive and no one wanted to go near her, which meant that she probably didn’t have much time.  Even so, I knew I couldn’t rush her, so I opened the cage door and waited to see what she would do. She seemed to have the same idea and her whole body pressed against the back of the cage, waiting to see what I would do, so I tentatively extended a hand on the ground in front of her.  She looked at it and then at me.

I moved closer.  She let out a tiny growl. I ignored it and waited, until eventually she leaned forward and began to sniff the hand all over, so I could then gently rub her cheek. She looked confused, as if she couldn’t understand why someone was being nice to her, and that convinced me that she must have gone through something pretty awful, to make her so suspicious and defensive.

Fortunately I was in no hurry, so I gave her the other hand to sniff, she examined it carefully and evidently found nothing wrong with it, so then I was able to rub both her ears at the same time, and this pushed her over the edge. She walked to the front of the cage, sniffed my face and climbed onto my shoulder.

So there we were walking around the yard, and Prinny was quite comfortable in my arms. I moved to put her on the ground and she swung around to nip me, but fortunately I sidestepped her and got out of range of her tiny teeth, and then just let her walk along at her own pace.  Every now and then I would bend and stroke her gently, and each time she would start to swing round to bite, then realize it was not a precursor to an attack and she would subside.  We walked for some time, and when I bent to pick her up this time she nearly got me, so I realized that this was a real challenge, and I would have to re-group.

I maneuvered her around to where I usually sit on a stone bench, and I sat. She walked around a bit at the end of the leash, then turned, looked at me, and jumped up beside me.  Surprisingly, in this position she allowed me to pet her and at a certain point she actually lay down beside me.  I was itching to get at the clumps of matted fur but knew I would have to take my time and wait till she was ready, so I just rubbed her ears and talked to her and didn’t push my luck.  After a while I went to pick her up, and though she tensed up a bit she didn’t stop me.  I got her back comfortably on my shoulder, and walked her back to the kennels, and she was quite calm as I placed her carefully back in the small cage and softly closed the door.

The next day she began to wag as soon as she spotted me, and came out with no problem at all. We went through the same process for a couple more days, and then I thought it might be time to try to work on her.  She didn’t want me touching her rear end at all, or her legs, but she allowed me to cut the mats hanging from her cheeks, around her eyes and under her ears, and give her eyes a good cleaning.  I’m sure this felt good to her, and she started nuzzling my neck, and getting progressively more friendly every day.

One of the reasons she was aggressive, I believe, was that she was hurting. I found dozens of burrs embedded in the mats, right up against her skin, which must have caused her pain every time she moved; I even cut them out from along her lips and under her chin.  So, at a certain point her head, neck and chest were cleared of mats and looking good, but she still wouldn’t let me do anything with her legs which were all covered in thick blankets of matted hair. Fortunately, I had figured out that if I went very gradually as she was walking along, and put both hands gently around her middle at the same time, she didn’t know which side to snap at, and in the meantime I could quickly lift her up. Once she was up and in my arms, she realized I wasn’t going to hurt her, and then it gradually got easier, til I could bend and lift her with one hand and she would actually help me, giving a little jump as I lifted. 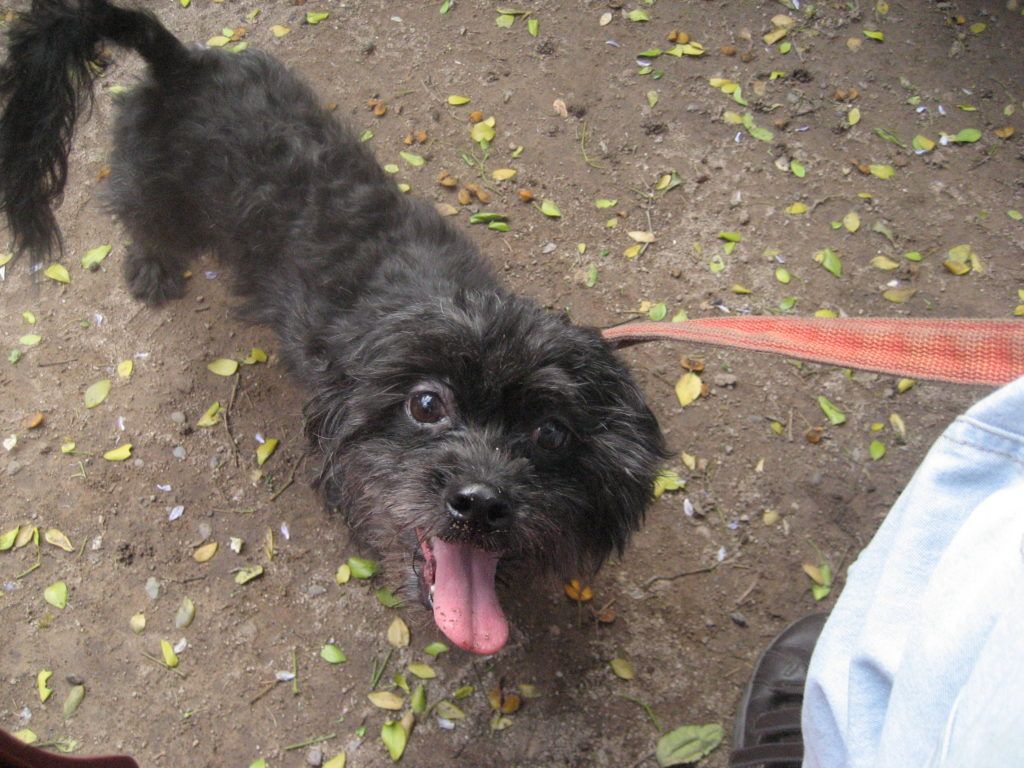 Exactly a week after I had begun working with her, just as I was reaching frustration point, I had a breakthrough.  I was beginning to get a little short with her, and telling her she had better decide to trust me because no one else was going to bother, and suddenly the leg that I had been tugging at went limp, she relaxed against me and I was able to make inroads into the layers of matted fur and, with a good deal of prodding and snipping, free one front leg. As I rubbed it to get the circulation moving, she looked at me in something like amazement, and licked my cheek. What a moment!

After that she was putty, and I could even flip over a paw and dig away at the hardened fur mixed with twigs and pebbles between her toes and pads.  She also allowed me to roll her onto her back and remove the mats on her chest and under her arms.   We were really making progress and I was so excited.

However, it seemed that her trust was restricted to me, as the workers still refused to have anything to do with her, except to tease her, which of course made her go after them.  They seemed to enjoy seeing which one of them could hit her on the head without getting bitten.

One afternoon I arrived just in time to save her life. . .

One of the workers had decided to put a rope around her neck and take her for a walk. She had panicked, pulled and snapped at him.  He got frustrated and vexed, and chucked her back in the cage, rope and all.  The rope was so tight she had vomited and was barely breathing.  One of the vets, in passing, told me not to go near her as she was too aggressive, but I opened the door and she immediately put her two front paws on my shoulder, while I promised her I would get the rope off her. It took a full 5 minutes to loosen, and she was very patient, and stayed in that same position, because she knew I was trying to help; finally she was free and I took her outside in the fresh air, gave her some food and water from my car, and by and by she began to feel better.  I still shudder to think what would have happened if I had been delayed, or decided not to go that day.

I knew it was going to be difficult to find someone to adopt her, so I sent out emails asking for a kind, gentle lady (she definitely hated men) who would have the patience to work with her and win her confidence.  A call came in that same night, very late, and the next day the girl met me at the shelter and signed up the papers, along with a declaration, at management’s insistence, saying she had been warned that the animal was violent.

Arrangements were made to spay Prinny in the next few days, even though the waiting list was a few weeks long, because management wanted her out of there.  I was a little nervous as to how the spaying would go, and sure enough they told me she had gone berserk and tried to bite everyone in the room, but that the surgery had been done successfully.  She and I continued our walks and by this time she was thoroughly trimmed, combed and looking lovely, and very affectionate.   But her new owner didn’t come for her.

I tried every way possible to find her, but she was not at her house, nor did she answer her phone or return calls, and I began to worry again that Prinny would either end up with someone who wouldn’t know how to deal with her — whom she would bite, and end up thrown in a gully — or be put down as unadoptable.

One afternoon I was walking with her in my arms and was hailed by a girl I had met the previous week, who was in the process of adopting one of the male shihpoos.  She really liked Prinny, and to my surprise Prinny took to her too.  We brought out the little male she was adopting and put them together and they immediately started playing and interacting — so that sealed the deal.

On the day when the girl came to collect Prinny, it was really hard to say goodbye, especially since she couldn’t understand why I was leaving her with this person and kept trying to follow me.   I waited what seemed an eternity (but it was only two days), and called her. She said the only problem she had was that Prinny wanted to sleep in her bed instead of the brand new one she had bought for her, and that she didn’t really like her Dad so much, but that she was learning. I breathed a huge sigh of relief. 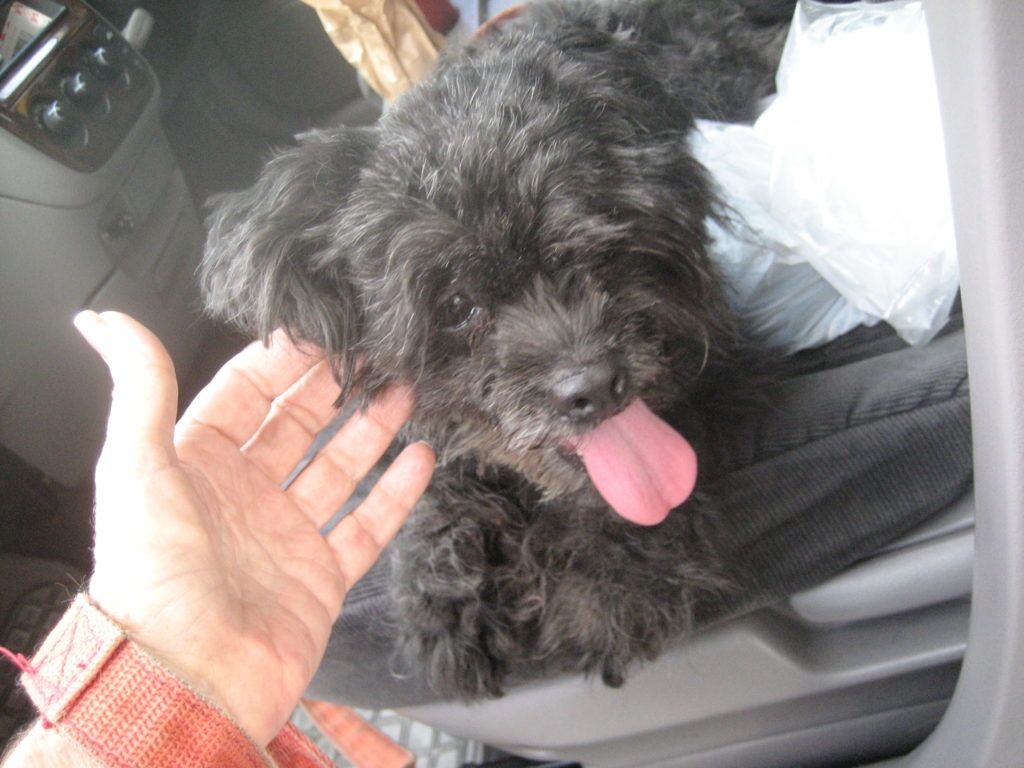 I never heard another word from the first girl; it was as if she had dropped off the face of the earth. She’d seemed so nice and genuinely caring that it puzzled me. But after a while the penny dropped — she had never intended to adopt Prinny in the first place, but had paid the adoption fee to buy her a little more time to find the right person.