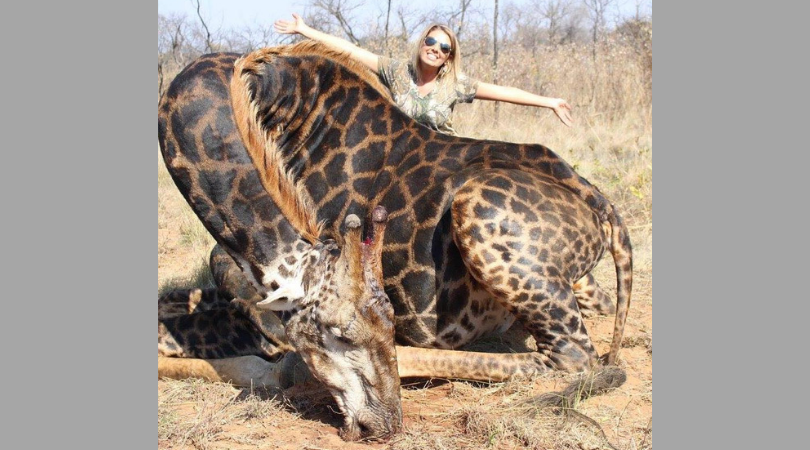 UPDATE (6/27/2022): We sent our petition, signed by more than 27,800 people, to the FWS. Thank you to everyone who signed our petition. Sadly, trophy hunting of giraffes and the legal import of giraffe parts into the United States has continued. If you’re reading this, please sign our new petition advocating for protections for giraffes under the Endangered Species Act. —Lady Freethinker Staff

Lying crumpled on the dusty ground, long legs tangled underneath them and graceful necks wilting into the dirt as trophy hunters raise their arms in victory.

Photo after photo highlights the tragic slaughter of these magnificent giraffes, hunted by the thousands only to be turned into trinkets in America.

With numbers estimated to have fallen by 30 percent since the 1980s, this incredible species is disappearing right before our eyes.  Between 2006 and 2015, 40,000 giraffe parts were legally imported into the US.

Thanks to pressure from conservation groups, the US Fish and Wildlife Service (USFWS) is now finally considering listing giraffes as endangered.

Doing so would ensure that restrictions are placed on their import into the country, and conservation efforts could be supported with federal funding.

Only around 110,000 giraffes are left in the wild. Already struggling under the assault of habitat loss and poaching, these beautiful animals deserve to be protected from trophy hunters.

Sign the petition urging the USFWS to add giraffes to the Endangered Species List, so trophy hunters no longer get a free pass to gun down one of the planet’s most unique animals.