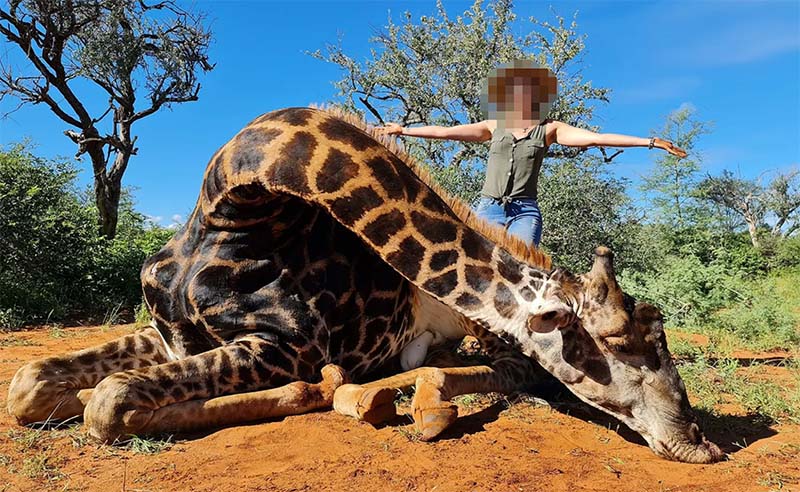 Beloved giraffes are under serious threat of extinction, their lives threatened by war, human encroachment, trophy hunters and illegal poachers who brutally kill the animals, hack them apart, and sell their bones, skins, and heads to overseas markets – including in the United States.

U.S. law does not prohibit the trade in giraffe parts, and the U.S. market imported more than 40,000 giraffe parts and products in one decade alone, including more than 21,000 bone carvings and more than 3,700 hunting “trophies” of the gentle animals.

Those numbers make the United States a top importer and seller of giraffe parts – and a key contributor to the species’ possible extinction.

The demand for giraffe parts – cruelly and senselessly made into trinkets like knife handles, jewelry, rugs, and book covers — is fueling illegal poaching and trophy hunting, said the Humane Society International and the Center for Biological Diversity, two groups that sued the federal government for missing a deadline after they presented significant scientific evidence in 2017 that giraffes need federal protections.

Because of that lawsuit, the U.S. Fish and Wildlife Service now has until 2024 to issue a ruling on whether to protect giraffes under the Endangered Species Act (ESA) – and it’s imperative that they do.

Giraffe populations have plummeted by 40 percent in the last three decades, with only about 68,000 mature adults left in the wild, according to the International Union for the Conservation of Nature (IUCN).

Their decreasing numbers led the IUCN to list them as “vulnerable” to extinction in 2016. By 2019, four of the nine subspecies had their status changed to “endangered” and “critically endangered,” with some species having only an estimated 400 to 600 giraffes left.

Giraffes already are facing serious dangers from civil unrest, human encroachment, and habitat loss. There’s no reason they should also be killed and dismembered to feed people’s fetishes for “trophies” and trinkets made out of their corpses.

ESA protections would help curb U.S. imports and sales of giraffes and also would increase conservation funding to help preserve these iconic animals. We must do all we can to save giraffes before it is too late.

Sign our petition urging the U.S. Fish and Wildlife Service to promptly review the significant scientific evidence that clearly shows giraffes need these protections – and then give these innocent animals the federal protections they deserve.