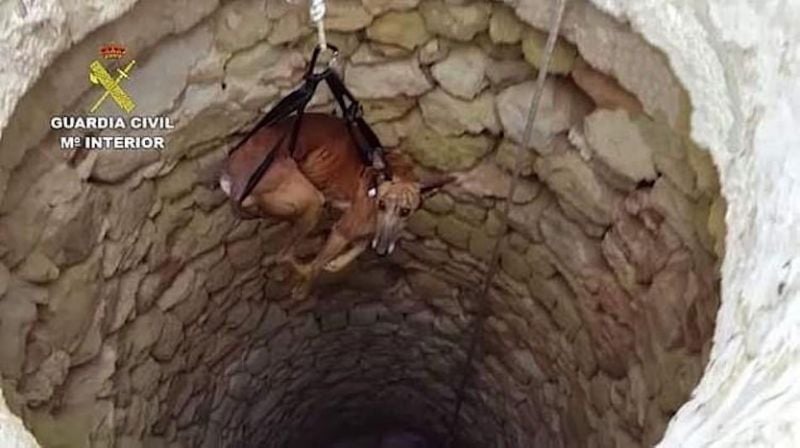 Dog thrown down well to die - Image via Guardia Civil

The Embajada de España informed Lady Freethinker that Spain has amended its criminal codes to cast a wider net of accountability and penalties for animal abusers.

“We would like to inform you that, as a result of the growing awareness regarding animal welfare, Spain amended article 337 of its Criminal Code,” an embassy spokesperson said, “thus widening offenses that can be prosecuted as a crime. The article now covers not only mistreatment or abuse that causes any harm to the animal, but also aggravated punishment depending on the type of mistreatment, the degree of suffering provoked and the results thereof.”

We want to thank the more than 31,000 people who signed our petition demanding accountability for these greyhounds.

Some dogs suffer a hanging death, left to dangle from the noose for days while they slowly starve. Others are burned with painful acid. Yet other dogs are thrown down wells, left to die slowly with broken bones and a crushed spirit.

While such torture of animals is illegal under Spanish law, there is shockingly little regulation of the Galgueros who breed these dogs. Aside from the cruel killings, the greyhounds endure terrible treatment every day of their lives. Training for competition involves tying a dozen dogs to the back of a car and dragging them down the road. Since the dogs are deemed disposable, there is little concern if they are injured or killed.

With investigations and exposés of mass greyhound killings mounting, Spain can no longer ignore the cruelty. It’s time to stop the torture and death.

Sign this petition to urge the Spanish ambassador to the US do everything in his power to outlaw all use of dogs in hunting and competitions before the next season begins — so that no more innocent greyhounds suffer.