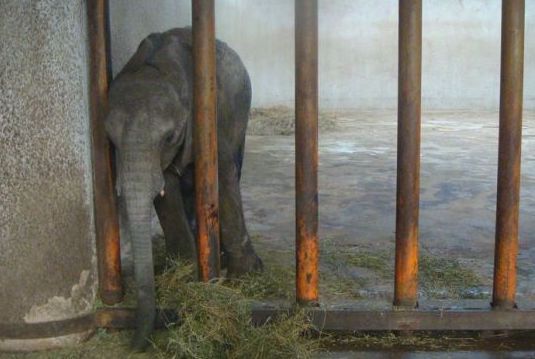 Thirty-five baby elephants were torn away from their mothers in a terrifying attack; beaten, abused, and locked in cramped holding pens in Hwange National Park in Zimbabwe. They are now slated to endure a grueling, 7,000-mile journey to China, only to face a life of miserable captivity in notoriously inhumane zoos.

We must speak out to spare these babies from a life of suffering.

Animals as young as two years old — not even weaned from their mothers yet — are targeted by officials for sale. Some infants die during transit; others survive the trip only to perish upon arrival.

In heartbreaking video released by Humane Society International (HSI) in 2017, park officials violently kick a disoriented and terrified baby elephant in the head as it cowers in the back of a truck.

Tragically, this is an ongoing operation between Zimbabwe and China. More than 100 baby elephants have been snatched from the wild and sent to suffer in zoos since 2012.

The Government of Zimbabwe has disregarded the pleas of dozens of animal welfare organizations and elephant experts over the last seven years and continue to take endangered African elephants from the wild under the thin guise of “raising funds for conservation.”

Sign this petition urging Zimbabwe to abandon all plans to send these 35 innocent elephants to a Chinese zoo. It’s time to stop the cruelty for good and protect these incredible animals instead of destroying their lives for profit.