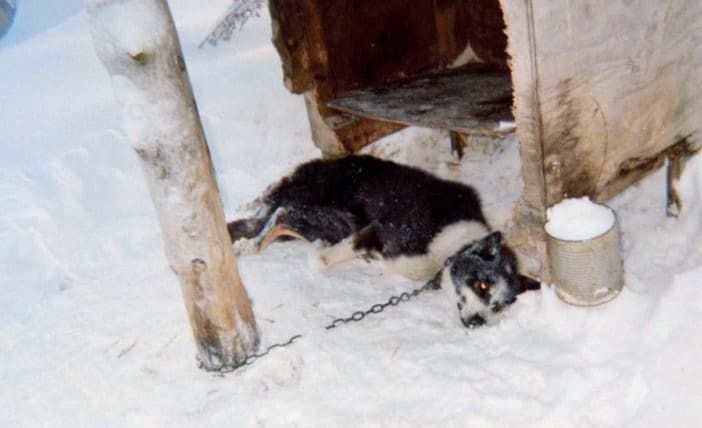 While Boppy’s “guardian” — a 2-time Yukon champion — is barred from racing in 2019, the torturous event will still go on, with the help of funding from the Canadian government. It’s time to stop the cruelty.

Boppy is just one of nine dogs who have died in the past decade at the grueling Yukon, a 1,000-mile race from Fairbanks, Alaska to the Yukon in Northern Canada. Some died from medical problems like sudden intestinal issues and internal bleeding. Others died choking on food, vomit, and pieces of their harness.

As with other sled dogs, the cruelty probably began long before the race even started.

Last October, disturbing photos surfaced online of the appalling conditions at a kennel owned by Dallas Seavey, a regular participant in the annual Iditarod race in Alaska. The startling images showed starving puppies, shivering in the freezing cold and with infected neck wounds.

Similar conditions were exposed in the 2016 documentary Sled Dogs, during which camera crews visited kennels where sled dogs were tethered to plastic barrels and surrounded by filth.

Sled dogs deemed too old or unfit to perform are often ‘culled,’ or killed. In 2011, a mass grave of 50 dogs was discovered on the property of a former sled dog musher in British Columbia.

This year’s Yukon Quest race is set to begin on February 2. Sign this petition urging Canadian Prime Minister Justin Trudeau to pave the way for the rights of sled dogs by ending government funding for this cruel and inhumane event.