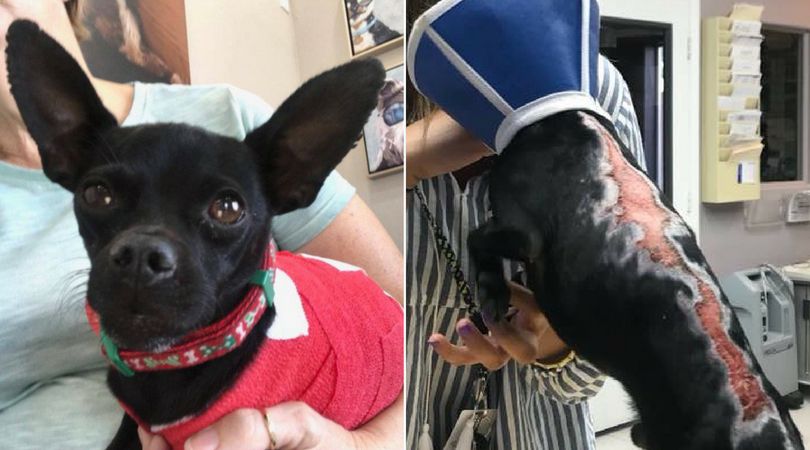 Images via Facebook/Chi of Hearts

UPDATE (6/16/2022): Happily, sweet Roger was taken care of by Dr. Muratore of Legacy Animal Hospital, was adopted, and now is living an amazing life, rescuers told Lady Freethinker. Those interested in following his journey can do so on his Facebook page. Unfortunately, on the criminal end of things, police were not able to identify or charge a suspect. While we are disappointed that no one was held accountable for this horrible act of cruelty, we are so grateful Roger has a good home now and we thank everyone who signed our petition! — Lady Freethinker Staff

In a heartbreaking case of animal cruelty, a gang of teens mercilessly tortured a tiny Chihuahua in Freedom Park, Las Vegas, inflicting severe burns over his back and torso.

A good Samaritan called the police, but it was too late to stop the gruesome damage.

The Animal Foundation raced to the scene, and reached out to Hearts Alive Village (who run the Chi of Hearts program to save local Chihuahuas) to find medical help. They rushed the dog — later named Roger — to Legacy Animal Hospital for emergency treatment. According to doctors, Roger’s extensive burns may come from fire, fireworks or chemicals.

Rescuers call this is the worst case of animal cruelty they’ve ever witnessed, with the initial injuries too graphic to share on social media.

Roger is receiving long-term treatment for his painful burns and has a very long road to recovery ahead of him. His attackers are still walking the streets, and must be caught before they harm any other animals or humans.

Sign this petition urging police to find and prosecute Roger’s attackers, and make it clear that such animal cruelty will not be tolerated.