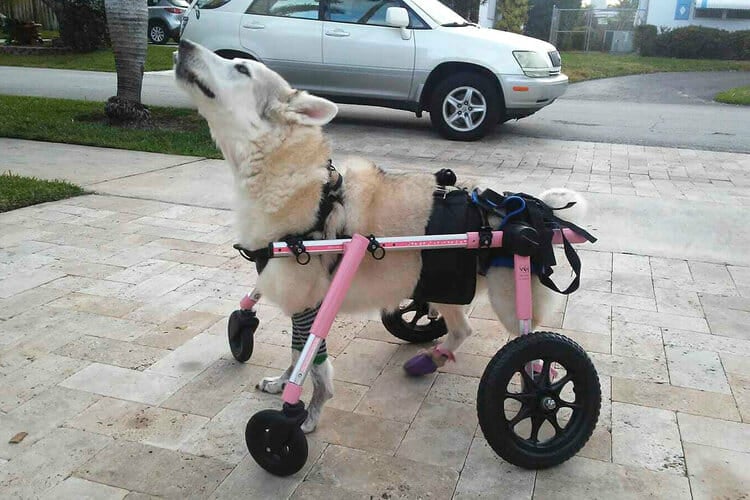 UPDATE (6/7/2022): Defendant Jephthe Jeanfrancois is waiting for his next hearing scheduled on July 15, 2022, according to court records. He is being charged with burglary conveyance, grand theft (motor vehicle), and aggravated animal cruelty. He has pleaded not guilty for each charge. We will continue to watch this case. –Lady Freethinker Staff

In a heartbreaking and needless tragedy, A wheelchair-bound husky named Zorra died after being kidnapped in the back seat of her guardian’s car when it was stolen from a Dollar Tree parking lot in Oakland Park, Florida.

“He stole the vehicle, he discarded the vehicle, leaving this dog stranded to its own devices locked in the car,” prosecutor Eric Linder said in court, according to the Florida Sun-Sentinel. “When the car was later found, the dog was found unfortunately deceased, and what I can only imagine greatly suffered.”

Wanda Ferrari left the disabled senior dog in her car with the air conditioning on while she momentarily stepped into the store.

When she returned, the vehicle was gone. Police located the stolen car several days later at a local tow lot and discovered Zorra’s lifeless body inside. The car thief had ditched the vehicle without concern for the dog’s survival.

Ferrari was relying on her beloved canine for emotional support while she undergoes cancer treatment. She’s heartbroken over the loss of Zorra, who was alone and undoubtedly terrified during her final moments in the stifling vehicle.

Police arrested the suspect, 19-year-old Jepthe Jeanfrancois, on 15 charges related to the incident. They connected him to the crime using surveillance footage and a GPS monitoring device he’s required to wear while he awaits trial for unrelated crimes.

It is crucial that the person responsible for Zorra’s untimely and painful death faces justice for their actions. Sign this petition urging Assistant State Attorney Eric Linder to treat this case with the severity it deserves and to prosecute the suspect to the fullest extent of the law.