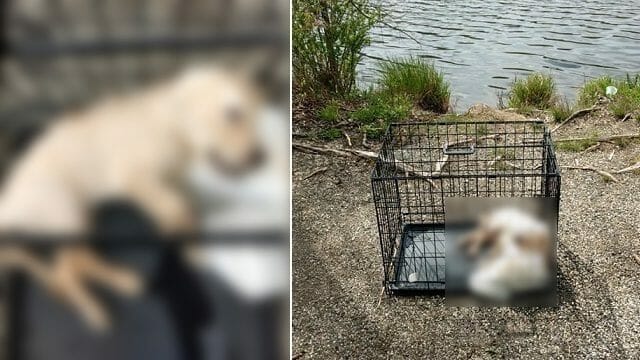 PETITION UPDATE (7/25/2022): Tonya Fea pleaded guilty to one count of third-degree animal cruelty. She was sentenced to 180 days in the Passaic County Jail and five years of probation, during which time she needs to complete 100 hours of community service. The court also prohibited her from owning dogs in the future. We thank everyone who signed our petition urging justice for this innocent dog, may this sweet puppy now be resting in peace! —Lady Freethinker Staff

An innocent 10-week-old golden retriever puppy was thrown into a weighted-down cage and submerged in a pond in West Milford, New Jersey.

While it’s unclear whether the puppy was dead before sinking into the water or if she was drowned, she clearly suffered during her final moments. When the cage was discovered by a worker from The Last Resort Rescue, the dog was lifeless, with bloody training pads stuck to the side of her face.

Whoever killed the pup deliberately weighted the cage using a crystal vase, which appeared to be from a local garage sale.

The deceased puppy was named Jenny by the rescue organization that found her, and she deserves justice. It’s imperative for police to thoroughly investigate this case, and find and apprehend the sick individual behind this gruesome act before they hurt another animal.

Sign this petition urging the West Milford Township Police to do everything in their power to identify and arrest Jenny’s killer(s).

Anyone with information about this case is urged to call West Milford Township Police Detective Eric Darnsteadt at 973-728-2801 or to contact the Passaic County Prosecutor’s Office at 1-877-370-PCPO or [email protected] There is a $7,500 reward for information leading to an arrest.