Image via Jennifer Stiffarm, who rescued Ritzy and reported to the police

We’re delighted to report that Ritzie the pitbull, found abandoned on a county roadside covered in wounds investigators believe came from illegal dogfighting, has found a loving forever home.

Gregory’s Gift of Hope, the New Richmond-based shelter that took her in, told Lady Freethinker that Ritzie’s healing process was slow, but her wounds healed and — bit by bit — she learned to trust. A couple with another companion animal adopted Ritzie and she is thriving, shelter staff said.

“This is a story of determination, will, love and a second chance,” the shelter posted on its Facebook page after the adoption. “Ritzie, you have had an interesting beginning to your life, now it’s time for chillin’ and enjoying your new forever home and your new two and four-legged family.”

Dogfighting is illegal in all 50 U.S. states and the District of Columbia. Unfortunately, local law enforcement wasn’t able to connect anyone to the crime.

“There were a number of avenues explored, but at this time, we haven’t been able to identify who was responsible for Ritzie’s injuries,” Anschutz told Lady Freethinker. “I can say the detective assigned to this case worked hard to try to catch those responsible and hasn’t given up on that goal.”

We want to thank the more than 32,500 people who signed our petition demanding justice for Ritzie. We’re thrilled that this beautiful pup has finally found the loving home she deserves. 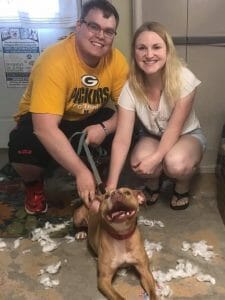 A wounded, emaciated pit bull named Ritzie was abandoned on a rural Minnesota road. Confused and terrified, she was covered in fresh, painful wounds on her face, front legs, neck, and chest.

She also suffered bite marks on her ears – telltale signs of dogfighting injuries, according to rescue worker Terry D’Amico.

Ritzie likely served as a “bait dog” to a cruel dogfighting ring. Ring leaders use bait dogs to test the “fighting instinct” of competing dogs, and the “bait” is often brutally injured or killed during training.

Gregory’s Gift, the shelter that took Ritzie in, stated on their Facebook page: “Ritzie is the aftermath of what people seem to think is a quick buck and a sport – dog fighting. It is no such thing, it is the torture and suffering of an animal, it is animal cruelty at its worst.”

It’s imperative to determine who is responsible for the horrific cruelty against Ritzie. There’s never just one victim in dogfighting. There could be hundreds more innocent animals in traumatizing conditions fighting for their lives.

Sign this petition urging the Washington County Sheriff’s Office to do everything in their power to find the person(s) responsible for this gruesome act of animal abuse, and prosecute them to the fullest extent of the law.