SIGN: Justice for Horses Starved Slowly to Death by Boarders 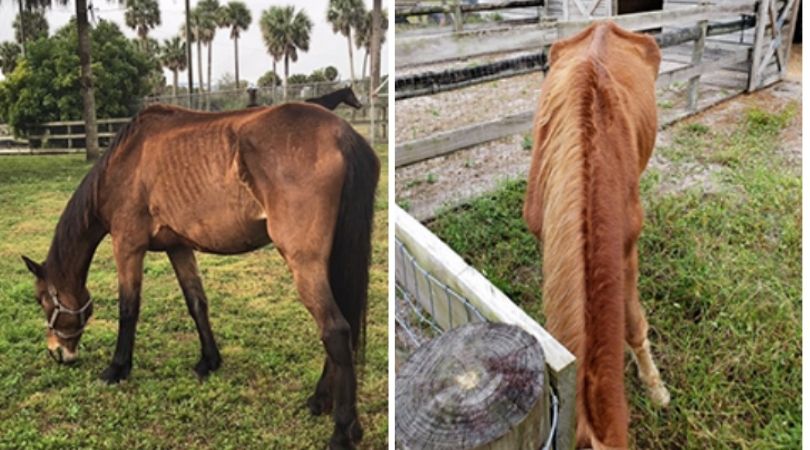 UPDATE (4/11/2022): Authorities arrested Joseph and Lisa Schoneman, who each faced 13 charges of felony animal cruelty, four counts of animal cruelty, and 17 counts of confinement without food, water, or exercise, according to CBS 12. A judge has since ordered 15 horses into the permanent custody of the county, fined the Schonemans $14,929 for the medical and housing costs incurred by the county, and barred the couple from owning horses for two years — a period that ended on March 14, 2021, according to court records. We thank the court for taking this case seriously and looking out for the immediate safety of the horse victims, although we are disappointed that a lifelong ban on animal ownership was not included in the sentence. —Lady Freethinker Staff

Authorities discovered one dead horse and at least half a dozen others that were severely emaciated when police and animal control raided a property in Loxahatchee Groves, Florida.

Photos reveal that the horses have been severely neglected and starved for quite some time, with ribs and hip bones dramatically jutting out from their bodies.

Working with Animal Care and Control, the Palm Beach County Sheriff’s Office said they obtained a search warrant for the private property following an investigation resulting from an anonymous complaint.

They removed 16 horses from the property — known as Amaryllis Acres, a boarding facility — sending the animals for immediate veterinary care.

Neighbors say that they have been complaining about this property for years.

The investigation is still ongoing, as specialists assess the condition of the seized animals. Animal Care and Control state that if the guardian does not voluntarily surrender the horses, they will go to court to ensure the animals are not returned to the property.

Sign this petition urging the Palm Beach County Sheriff’s Office to shut this cruel boarding facility down for good, and push for a lifetime ban on all guilty parties from owning any animals.