SIGN: Justice for Carriage Horse Who Collapsed In the Streets 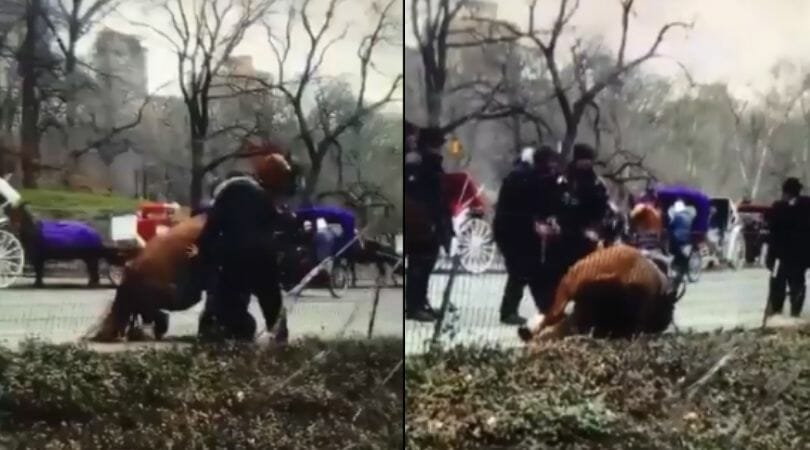 UPDATE (12/8/2021): A public records request to the NYC Department of Health and Mental Hygiene, which oversees carriage horse conditions, showed that veterinary review of Aysha’s body found no evidence of abuse, according to documents and correspondence from Veterinarian Camilo Sierra, who concluded Aysha likely died from a medical condition called PSSM.

“On physical exam, I found [the] horse in good condition, no evidence of struggle, no marks, no fractures and no injuries consistent with abuse or mishandling,” Sierra wrote. “Upon talking with emergency veterinarian and video that was captured, I must assume this horse sustained an acute case of Tying up or PSSM.”

A carriage horse repeatedly collapsed to the ground over a grueling 15-minute period, unable to pull herself back to her feet following a forced carriage ride in New York City.

Aysha, the 12-year-old mare, had her life cut far too short. After the ride, she became weak and struggled to straighten her back legs.

“Instead of calling a qualified vet to help this horse,” said Edita Birnkrant, the executive director of NYCLASS, “several carriage drivers tied him up with ropes … pulled him into a trailer, and they took him back to the stable.”

Birnkrant asserts a second video shows a carriage horse driver blowing cigarette smoke in the direction of the horse’s face.

Aysha’s tragic death is just one of the latest examples of why animal rights advocates have long criticized the treatment and care of carriage horses in New York City. We must continue making our voices heard in defense of these helpless animals, who are denied a suitable, spacious living environments free of compulsory labor.

Sign this petition urging Mayor Bill de Blasio and Council Speaker Corey Johnson to push for an end to the cruel horse-drawn carriage ride industry in New York City and make good on their promises to thoroughly investigate Aysha’s death.