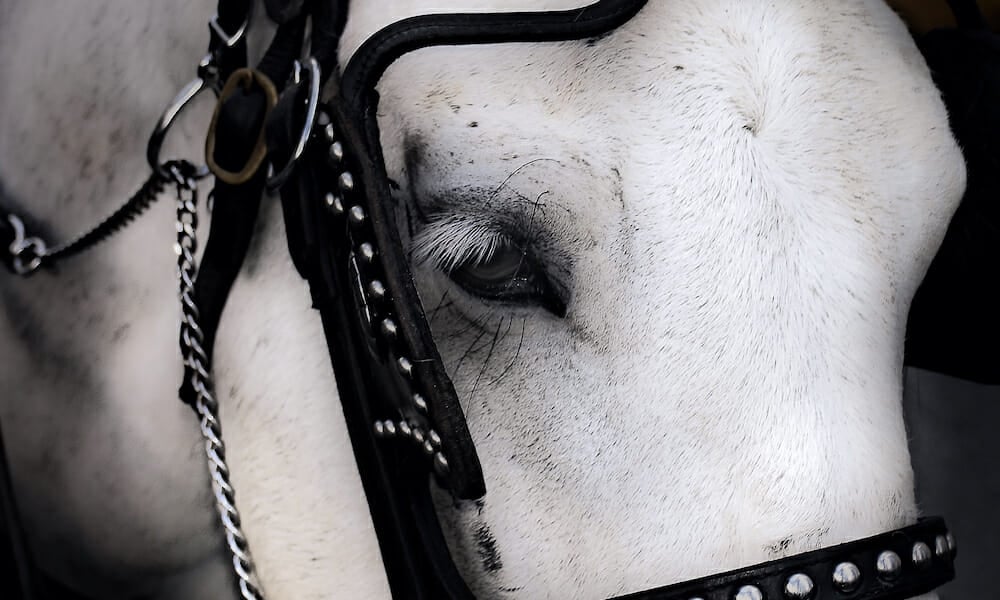 UPDATE (8/17/2022): Mayor Bill de Blasio’s term has ended without a ban being enacted, as he promised during his campaign. However, City Councilman Robert Holden has proposed legislation that would transition to an all electric carriage fleet by 2024. We’ve started a new petition and will continue to advocate for these innocent horses. — Lady Freethinker Staff

Chief, a horse forced into the horse-drawn carriage industry in New York City, writhed in clear distress on a blood-spattered pavement after striking a BMW, according to AMNY.

Despite existing city rules that claim to ensure welfare for these innocent horses, more than a dozen horses reportedly have endured injuries, death, and brutal treatments over the last decade – including horses that collapse from exhaustion, die or sustain injuries following collisions with bikers or vehicles, and who are victimized by some drivers who use beatings and choking as “training” methods, force lame horses to keep working, or deny the animals access to water.

The casualties include Aisha, a 12-year-old carriage horse who collapsed on the cold city streets after video showed her struggling to stand for more than 15 minutes. She was then pushed into a trailer by her drivers and euthanized the same day, according to National Geographic.

While Aisha’s death, Chief’s circumstances, and the numerous other instances of horses have sparked numerous protests and outrage over the years, New York’s laws haven’t changed.

That’s particularly relevant given a campaign promise, made in 2013 by current Mayor Bill de Blasio, to eradicate this cruel pastime on “Day One” of his elected leadership. De Blasio, who is considering running for governor and has only a few weeks left in his mayoral term, has renewed a last-minute push to ban horse-drawn carriages in New York City and instead replace them with electric “show cars” that would provide city charm to tourists without the cruelty.

Horses do not exist for people’s profit or entertainment, and their continued victimhood is not necessary for the city to flourish.

Sign our petition urging NYC Mayor Bill de Blasio to finally make good on his campaign promise – from years ago – and do all he can to stop any more innocent horses from facing unnecessary injury, cruelty, and death through the horse-drawn carriage industry – including having the city quickly contract with an engineering firm to conduct needed reviews and to get needed legislation before the city council before his term ends.

We’re also asking the NYC Council to timely review and support any required legislative changes and public hearings that are needed for that ban to happen.