SIGN: Justice for Great Danes Starved, Covered In Feces and Full of Parasites 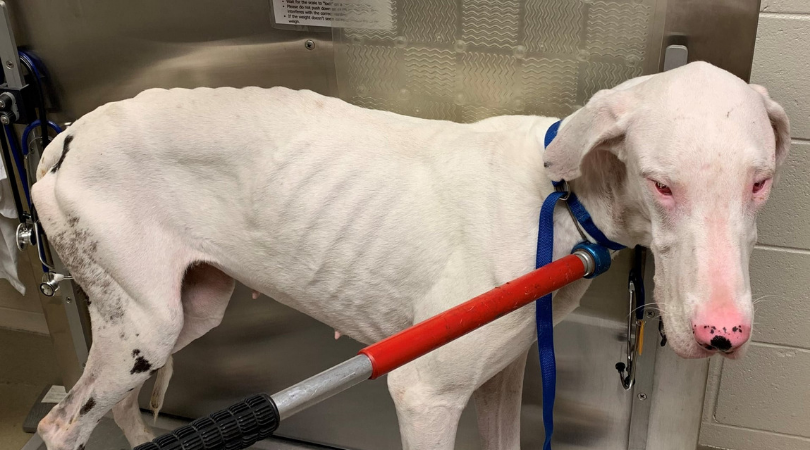 UPDATE (11/30/19): Candice Wheat was convicted of one misdemeanor count of animal cruelty. The charge was amended from a felony to a misdemeanor and the attorney’s office dropped 32 charges against her for failing to vaccinate and license her dogs. Wheat and husband Richard Awlasewicz have forfeited all dogs and neither are allowed to own or possess animals again. Wheat was sentenced to 12 months in jail, with all but 4 days suspended, and she’s also ordered to pay $571 in court costs by March 26, 2020. Richard Awlasewicz pleaded guilty on Friday, Dec. 20. He was sentenced to a year with 11 months and 16 days suspended and 3 years of probation. While we are pleased that Wheat and Awlasewicz were convicted of this crime and can not possess animals again, we are disappointed that the sentence does not match the crime.

A Virginia couple neglected 32 Great Danes so severely that some were on the brink of death. Five of these dogs were found shut in a run-down camper, covered in feces and urine with no water or food. There was no ventilation in the vehicle, and the temperatures were soaring.

Some of the dogs seized were so painfully thin they were rated -1 and 1 on a body condition scale from 1-5. Almost all were malnourished and loaded with intestinal parasites.

The living conditions were so filthy, the state health department had to intervene.

The King and Queen County Sheriff’s Department arrested Richard Awlasewicz and Candice Wheat and charged them with felony animal cruelty. The pair also face misdemeanor charges for having no county licenses and not vaccinating the dogs for rabies.

The 12 puppies and 20 adult dogs are now in the care of a local shelter; however, Awlasewicz and Wheat claimed that two of the animals are service dogs, and requested their return.

These people are guilty of horrific neglect, and a judge mustn’t allow them to ever have animals ever again.

Sign this petition urging Commonwealth Attorney Adkins to prosecute the pair to the fullest extent of the law and ban them from getting – and hurting – more animals.