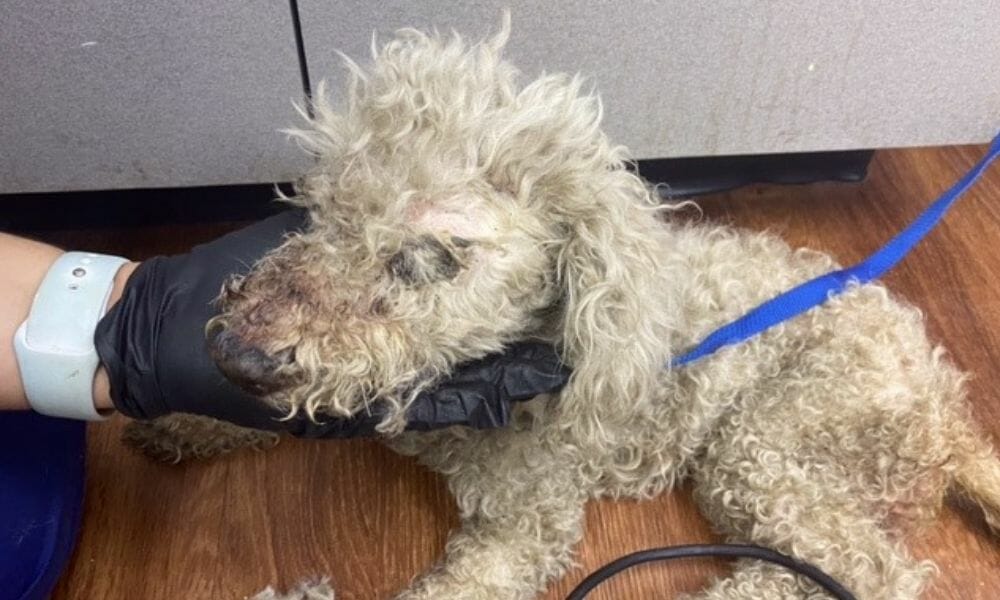 UPDATE (8/25/2021): The Orange County Sheriff’s Office said detectives will pursue felony charges against whomever hog-tied Petal and left her to die bound in a bag.

“We can assure you that the detectives investigating this horrendous crime take it seriously and are pursuing felony charges against the person or persons responsible for this crime,” a spokesperson told Lady Freethinker. “They have been following all available leads.”

We thank the more than 36,000 people who signed our petition demanding justice for Petal, and we will continue to follow this case.

Stuffed into a plastic bag with her mouth taped shut and her legs hog-tied, a blind, elderly poodle named Petal nearly died from hunger and dehydration after being discarded like trash behind a shopping plaza in Orlando, Fla., WESH reported.

Petal remains in the care of veterinarians and despite receiving IV fluids, pain medication, IV antibiotics, liquid iron, and eye drops, she has a long, hard road to recovery.

The senior dog was likely neglected before this horrific act of cruelty took place, according to the vet that treated her, the Orlando Sun-Sentinel reported.

While an adult poodle of her breed should weigh around 13 pounds, Petal weighed just eight pounds when she was rescued, indicating that she suffered from prolonged abuse before someone left her for dead.

After enduring such unimaginable suffering, Petal is afraid of people, yet she’s still very sweet, her caretakers told the Orlando Sun-Sentinel.

Whoever hog-tied this helpless dog, crammed her into a suffocating plastic bag, and left her on the hot pavement to die must answer for their actions.

Sign this petition urging the Orange County Sheriff’s Office to use all available resources to find and arrest the individual(s) responsible for this abhorrent crime.

This is an ongoing investigation. Anyone with information is urged to call Central Florida Crimeline at 800-423-8477.