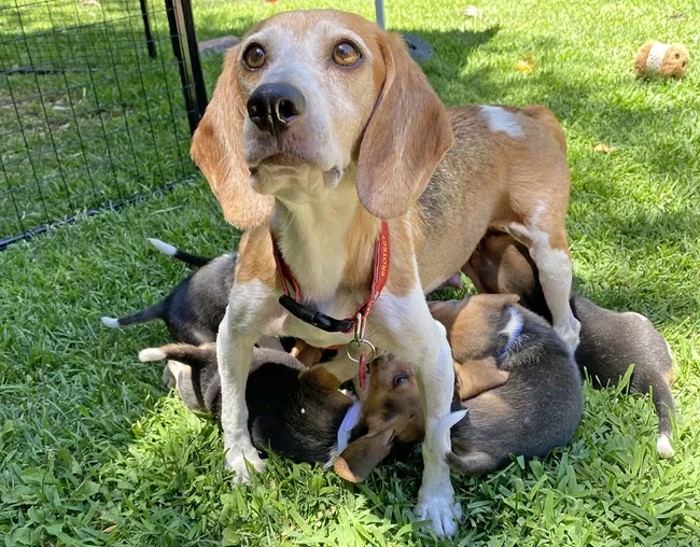 Markle, who also adopted a rescue beagle Guy in 2015, wanted to get involved when she saw news stories about the Virginia-based facility, which shuttered earlier this year following federal complaints about ill and dead dogs and egregiously unsanitary conditions.

She reportedly called Shannon Keith, an animal rights attorney for the Beagle Freedom Project, and then arrived with Prince Harry and two security guards to meet a potential new canine companion.

Keith said Markle knew as soon as she held Momma Mia, who traveled to the rescue from Maryland with eight of her puppies.

“The Duchess is holding Mia and was like, ‘We’re adopting her,'” Keith told People.

“They made a point to adopt a rescue named Mia, who most would overlook because she is older, has health issues, and is traumatized by her past,” Keith said.

Before the couple left with their new friend, Prince Harry reportedly paused and asked Keith if Momma Mia had a favorite toy that they could take with her. The Beagle then snatched out of a toy box a fox toy, which had made the drive with her from Maryland, according to news reports.

Mamma Mia was one of 4,000 dogs rescued by federal authorities in July and then surrendered by Envigo, per a federal court order.

Her new home will be a seven-acre home in California, where she has been given the title “Dog Duchess of Montecito, according to the L.A. Times.

“They have been following up letting us know how well Momma Mia is doing in her new, amazing home,” Keith told news.

Beagle Freedom Project took in 25 dogs rescued from Envigo. With a waiting list of 1,000 people who want to help the dogs, all rescued from cruel research, Keith said the rescue should have no problem finding the perfect match for each dog.

As of Aug. 25, 91 other rescues in 26 states around the country also have stepped up to take in the massive number of abused and exploited beagles from Envigo, according to a list of partner organizations maintained by the Humane Society of the United States (HSUS), which is spearheading and coordinating the rescue movement.

We are so grateful that these cruelly exploited dogs have so many people mobilized on their behalf and now have a chance to live the peaceful and kind lives they deserve! If you’d like to get involved, you can check out the HSUS’s website, including resources, here.