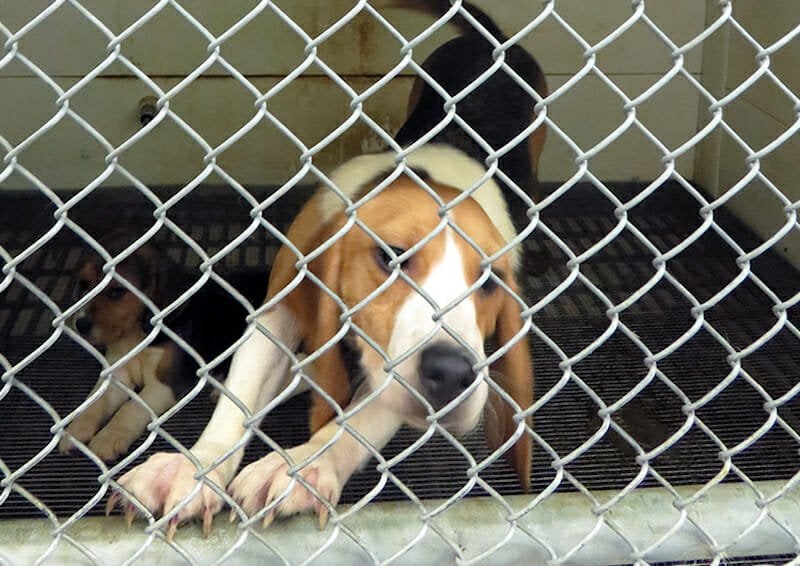 UPDATE: In a fantastic development, a judge has denied Envigo’s proposal to sell more than 2,000 beagles to additional cruel experiments into 2023!

A dog breeding facility for medical research with dozens of federal animal welfare violations has announced it’s permanently closing – a victory for animal advocates everywhere that’s dampened by a likely bleak outlook for the 3,000 remaining dogs, according to WRIC.

Envigo’s facility in Cumberland, Virginia, has been the subject of numerous federal complaints, news investigative reports, and an undercover investigation by the People for the Ethical Treatment of Animals (PETA) after inspectors documented malnourished, sick, and injured animals.

Lady Freethinker also sent our petition, signed by more than 47,500 people, to the U.S. Department of Agriculture (USDA), urging the agency to shut down the cruel breeding facility.

In May, a federal judge ordered a restraining order, then followed up in June with an order to Envigo to stop breeding dogs until coming into compliance. That same month, the company Inotiv announced the planned closure of the Cumberland facility.

The company’s statement makes no reference to the numerous, serious animal welfare violations, citing instead increasing costs for required improvements and an unwillingness to further invest in the location due to minimal profit margins.

“Cumberland comprises less than 1 percent of our total Inotiv revenue and has not contributed to profits in our research models and services segment since the acquisition,” the company said. “We will not be investing further in this facility.”

The company doesn’t detail what will happen to the estimated 3,000 dogs still at the facility – saying only that it will “implement an orderly closure plan.”

That allowance means those hundreds of dogs, who already have suffered in the documented atrocious conditions, likely are heading to additional misery at the hands of researchers, said PETA’s Vice President of Evidence Analysis Dan Paden.

Paden added that selling the animals — rather than allowing them to be put up for adoption and live out the rest of their lives in peace — is fueled by greed.

“To forgo a few thousand dollars they hope to make off these animals, given their $330 million company, they don’t need this money,” Paden told CBS 19. “This is pure greed they’re doing this for.”

Envigo has not responded to multiple media inquiries from Lady Freethinker.

In response to this horrific development, 29 lawmakers have sent a letter to Kevin Shea, the administrator of the USDA’s Animal and Plant Health Inspection Service (APHIS), asking for an immediate revocation of Envigo’s license for at least 21 days.

“Despite not having been compliant with the basic and minimal requirements of the Animal Welfare Act for almost a year now, Envigo has asked that the U.S. District Court for the Western District of Virginia allow it to continue engaging in regulated activity and sell these animals in commerce,” the letter says.

Despite the Cumberland closure, Envigo still could face civil penalties of up to $10,000 per documented violation in further court proceedings.

We thank everyone who signed our petition, and we’ll keep doing all we can to advocate against the use of sentient animals in cruel experiments.