Home » Animals » Save a Bird’s Life This Thanksgiving with the ‘Adopt a Turkey’ ProjectBy Katie Valentine | November 21, 2020 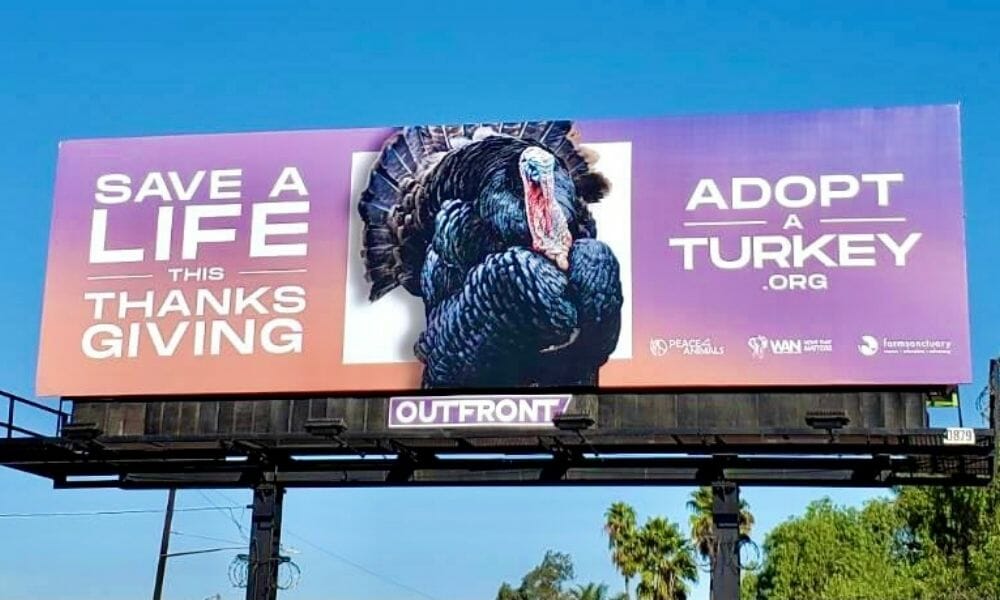 Save a life this Thanksgiving by leaving turkey off your plate and adopting one through the ‘Adopt a Turkey’ project from nonprofits Peace 4 Animals, World Animal News (WAN), and Farm Sanctuary.

For just $35, you can sponsor a turkey that has been saved by Farm Sanctuary and housed at one of their Watkins Glen, N.Y., or Los Angeles locations. Or adopt an entire flock of turkeys for $150. Everyone who donates will receive an adoption certificate as a reminder that turkeys deserve a life free from cruelty and suffering.

“We began the ‘Save A Life This Thanksgiving, Adopt A Turkey’ billboard campaign after realizing that something needed to be done to raise awareness about the estimated 46 million turkeys who are killed in the United States for Thanksgiving alone each year,” Katie Cleary, Founder and President of Peace 4 Animals and WAN, said in a press release. “This campaign, in partnership with Farm Sanctuary, sends a clear message to choose compassion on your plate and change the way we’re conditioned to think about farm animals in this country; to actually make a connection to who we are eating.”

On cruel factory farms, innocent turkeys are crammed by the thousands into dark, warehouse-like spaces and slaughtered by high-speed machines while shackled upside-down by their feet. Those who aren’t killed instantly are thrown into a giant pot of boiling hot water and burned alive.

To contribute to this important cause, visit the ‘Adopt a Turkey’ website.