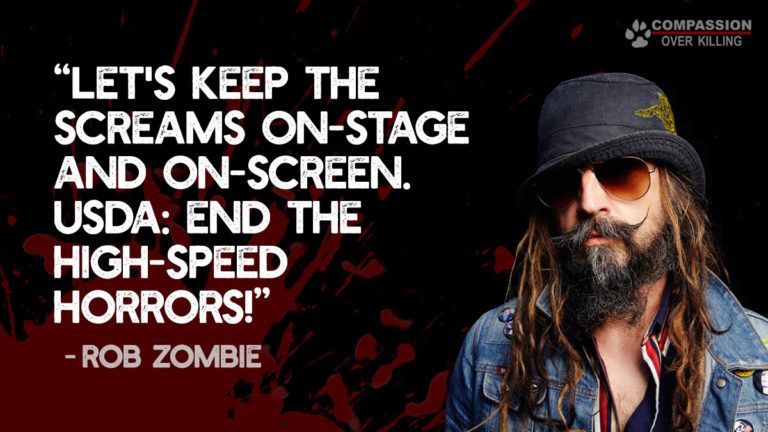 Zombie, well known for directing gore-fest movies such as The House of 1000 Corpses and The Devil’s Rejects, is a vegan, and his passionate plea is circulating via targeted cell phone ads around the USDA headquarters in Washington DC.

Earlier this year, the USDA proposed an increase in line speeds at pig slaughterhouses — a move that has been strongly opposed by animal advocates across the nation, including LFT.

On top of this house of horrors program for pigs, the USDA is now making allowances for increased slaughter line speeds in chicken plants, increasing the number of birds killed from the current — already unmanageable — rate of two birds a second to a mindblowing 175 birds every minute.

This recent decision by the USDA to grant waivers to chicken slaughterhouses that want to increase their killing speeds was made without any call for public comment, even though 100,000 people contacted them about their concerns last year.

Undercover investigations in the last few years have revealed the gut-wrenching conditions suffered by both pigs and chickens in slaughterhouses, documenting abuse, torture and completely inhumane practices — which will only get worse as line speeds increase.

“While the USDA frames high-speed slaughter as ‘modernization’ of the meat industry, you’d have to be a zombie to miss that it’s a horrifying step backwards endangering animals, workers, and consumers,” said Laura Cascada, director of corporate outreach for COK.