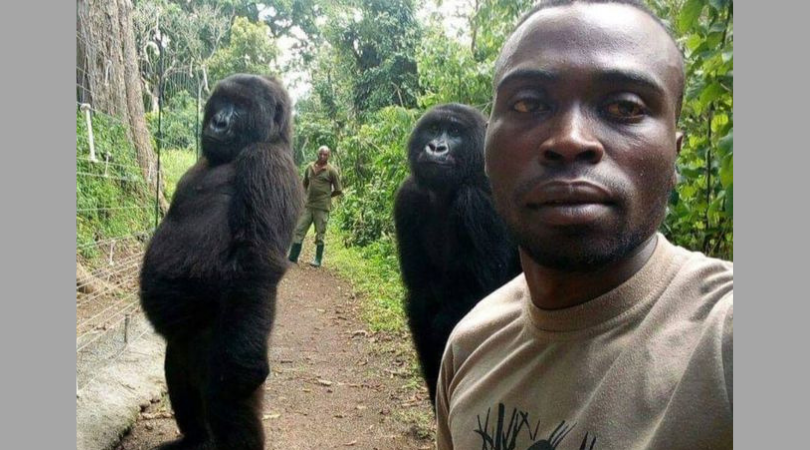 Virunga Park Rangers released a touching selfie recently, featuring two of the mountain gorillas who have spent their lives in the care of these selfless men.

The photo shows two mature gorillas casually standing upright alongside their guardians on the edge of a forested area.

While the image is comical, the story behind it is far more troubling. The animals live at the Senkwekwe Sanctuary within Virunga National Park, which is located in the Democratic Republic of Congo (DRC).

These gorillas ended up here after losing their families at the hands of poachers when they were only two and four months old, respectively.

“They are imitating the humans,” said Mr. Mburanumwe. “It doesn’t happen normally. I was very surprised to see it… so it’s very funny. It’s very curious to see how a gorilla can imitate a human and stand up.”

Senkwekwe Sanctuary is the only center in the world looking after orphaned mountain gorillas. It is named after a gorgeous silverback male who was brutally murdered along with three other members of his family in 2007, making headlines worldwide.

Only around 1000 mountain gorillas remain in the world, and one-third of them are in Virunga.

Virunga is the oldest national park in Africa. It is the continent’s most biologically diverse protected area, but has long faced conflict, war, and violence due to its position on the border of the DRC.

Roughly 600 park rangers protect the park and its inhabitants, which include elephants, hippos, lions, chimpanzees, mountain gorillas, and eastern lowland gorillas — along with more than 700 bird species and a huge variety of reptiles, insects, and plants.

But it’s a dangerous job. Every day, these brave men and women put their lives on the line. So far this year, two rangers have lost their lives, bringing the total number of ranger deaths in the park to 177.