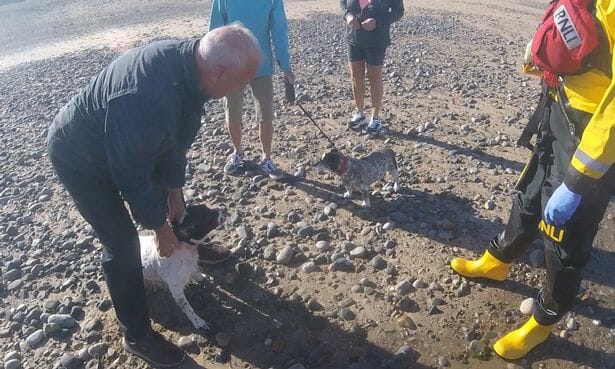 After chasing a flock of seagulls, a spaniel found himself stranded in the water near the oceanside town of Rhyl, North Wales. But thanks to the brave efforts of a quick-acting rescue crew, he is now safe and sound.

The adventurous pup took off after the flock of birds while out on a morning walk with his guardian, BBC reported. As the seagulls flew further away, the dog continued to follow them. His worried guardian summoned emergency services, and a joint rescue team from Rhyl Royal National Lifeboat Institution (RNLI) and the Rhyl Coastguard rushed to the scene.

Rhyl @RNLI volunteers rescue dog after it chases seagulls out to sea. pic.twitter.com/26PjL4mwZV

The crew retrieved the canine from the water a half-mile from shore and safely brought him into their lifeboat. Video footage of the heroic rescue quickly went viral on Twitter.

“There was initial worry the owner would attempt to rescue the dog, but on the coastguard’s advice, [he] remained on the beach, keeping the dog in sight,” Martin Jones of Rhyl’s RNLI Lifeboat said. “We are so happy the animal and [his guardian] are reunited.”

Lady Freethinker applauds the rescuers who diligently responded to the call for help and saved this dog’s life.