SIGN: Justice for Dog Viciously Beaten So Rescuers Would Pay to Save Them 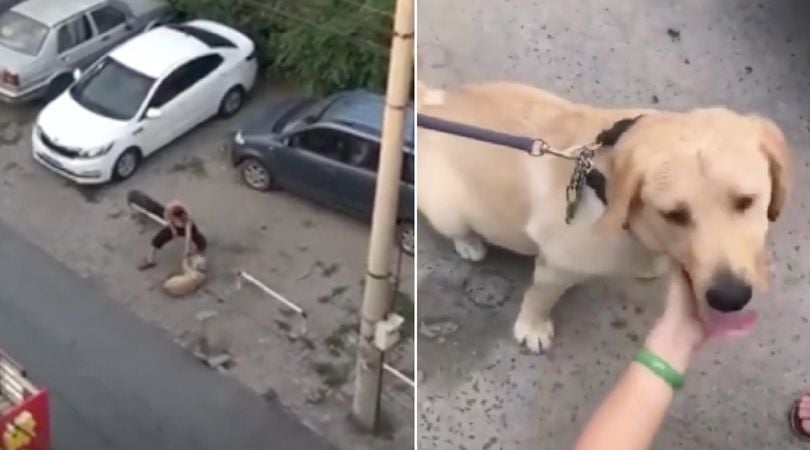 UPDATE (6/17/2022): We sent our petition, signed by more than 20,600 people, to the Chinese Ambassador. Thank you to everyone who spoke up on behalf of these animals! Unfortunately, despite multiple checks back, we were unable to obtain any additional information about this situation. We’ll keep doing all we can to advocate for animals. — Lady Freethinker Staff

In a shocking case of animal cruelty, a man in Jilin city, China, brutally beat a dog with a piece of wood, purely so kind-hearted animal lovers passing by would purchase the injured animal to save it from the torture.

Neighbors filmed the terrified dog cowering on the pavement, howling in pain as the man gripped its leg and viciously clubbed it. Tied to a metal railing, the dog was unable to escape.

A passing good Samaritan witnessed the beating and purchased the abused dog for 3,500 RMB (just over $500 USD).

A witness reports that this man has beaten and sold dogs on at least two previous occasions in a twisted money-making scheme.

Although the incident was reported to police, who later spoke to the offender, no action was taken – there is no law in China that protects domestic animals from abuse. However, there must be consequences for so repulsive an act.

Sign this petition urging Chinese Ambassador Cui Tiankai to demand that this serial abuser is prosecuted, and to push for China to enact new laws that will protect all animals in the country from acts of cruelty.